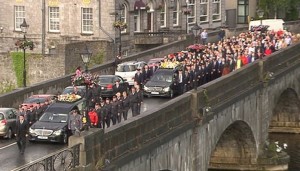 More than 1,800 people gathered at the Church of Saints Peter & Paul in Athlone yesterday morning for the funeral of Larry and Martina Hayes.

The Co Westmeath couple were killed in a terrorist attack on a beach in the Tunisian resort of Sousse on Friday 26 June 2015.

In a tragic twist of fate, the funeral took  place on the birthday of the couple’s only child, Sinead (31).

“Could anyone think of a sadder or more heart-rending way to celebrate your birthday than to attend the funeral of both of your parents?” commented Fr Liam Devine PP the chief celebrant.

The couple were well known in the town. Martina worked in a local pharmacy while Larry was a school bus inspector with Bus Éireann.

Before the Mass yesterday, a group of more than 30 Bus Éireann drivers and inspector marched in front of the funeral cortege as it was brought to the church and Larry’s work tie was one of the gifts brought to the altar.

There is nothing – no human experience of grief and loss – that could possibly prepare a family or a community for the devastating news that filtered through to Athlone last Saturday night and Sunday morning, said Fr Devine at the start of his homily.

“The violent deaths of Larry & Martina Hayes while nearing the end of their holiday in Tunisia has left the entire community in Athlone shocked, stunned and devastated. It is unprecedented. Unreal. It is almost impossible to come to terms with it.”

It was baffling he said to think that in the holy month of Ramadan – equivalent to Lent in the Catholic religious tradition – that a violent atrocity claiming 38 lives, would also touch the lives of people in Ireland.

“For some time now the violence of a misguided group of ISIS terrorist fanatics have invaded our living rooms. It was a long way away, we put it in the back of our minds, it didn’t concern us. But now, it’s here. It has invaded our town in two coffins.”

He went on: “The appalling massacre of Larry and Martina Hayes and 36 others at the hands of a crazed brain-washed fanatic on a beach in Sousse has stunned the entire nation into disbelief.”

We don’t have to wait for Holy Week to experience Good Friday. This is a Calvary moment for the Hayes family and for you, Sinéad, he added.

“We, in the parish community, walk the Way of the Cross with you, in prayerful solidarity and quiet compassion.” 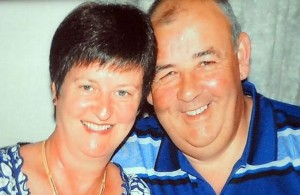 The couple, whom Fr Devine described as soulmates, had been taking a final walk along the beach at the Sousse resort before flying home when killer Seifeddine Rezgui began his attack.

They had been married for 32 years.

“They went everywhere together. They shared a common interest in gardening. They were very proud of their strawberries and flowers. Martina’s home was her castle. She was a brilliant housekeeper. You would be hard pressed to find a speck of dust in the house. Efforts to find fingerprints in the house proved futile, such was the pristine state of everything. The finger prints were found in their car that was in the airport awaiting their return,” Fr Devine told the congregation.

Larry and Martina will never again be touched by violence, he said.

When he visited the family last Sunday, Bishop Kevin Doran said, “to suggest that such violent acts is justified by religious beliefs is totally false. The one God in whom both Christians and Muslims believe is a God of peace.”

The massacre of innocents was always an abominable crime. When done in the name of God it was also “blasphemy”.

In the Gospel chosen for this funeral Mass, Jesus said to his disciples: “Do not fear those who kill the body but cannot kill the soul; rather fear him who can destroy both soul and body in hell.”

In a statement, the Islamic Cultural Centre of Ireland (ICCI) condemned the “atrocious acts of terrorism” perpetrated in Tunisia and extended “heartfelt condolences to the Hayes family from Athlone on their tragic loss of both Laurence and Martina,  and to the family of Lorna Carty from Robinstown who also was taken from them in such horrifying circumstances.”

We stand with all of Ireland in the condemnation of unjustified killings of the innocent, it said, adding that the ICCI “positively promotes integration, respect for humankind, and the protection of human life.”

Members of the Islamic community were among the mourners at yesterdays funeral.