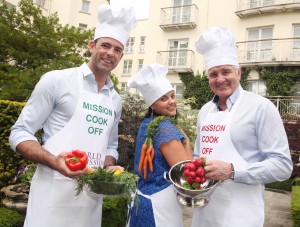 Rugby pundit, Brent Pope, along with Kildare GAA football star, Dermot Earley, and Soprano, Celine Byrne, have launched a nationwide cookery challenge which aims to provide one million dinners to children in the developing world through mission projects.

The ONE meal cookery challenge is an initiative of ‘World Missions Ireland’.

It is asking contestants to devise a dinner menu to feed a family of six for €5.

Menu entries will be judged by Brent Pope, Celine Byrne, Dermot Earley and Mary O’Rourke who will whittle entries down to a final five contestants.

A cook off will take place between the finalists in October, the traditional month of mission.

Speaking at the launch on Thursday in the Merrion Hotel in Dublin, soprano Celine Bryne, said that in Ireland when people have a fiver then tend to spend it on junk food.

“They go and buy a bag of chips or a pizza whereas actually you could make a nice nourishing meal for your family with a fiver,” she suggested.

Rugby pundit Brent Pope expressed his concern over the number of children in Ireland living on the poverty line who are being short-changed by a lack of nutrition in the food they are eating.

The Kiwi said that there was time when he allowed himself to indulge in a bit of junk food but “I always paid the price for it the next day”, he ruefully recalled. “As a judge, I will be looking for nutrition,” he warned.

He told CatholicIreland.net, “I try to do as much charity work as I possibly can. As far as mental health issues and depression are concerned there are serious links between good nutrition and physical exercise. It has been proven especially that diet that is based on junk food and too much sugar and salt are not good for people’s brains – so it is healthy mind and healthy body situation.”

Asked about the mission dimension to the initiative, Pope said he’d made various trips around the world with a number of charities.

“Part of it was living with the community and eating what they ate – it wasn’t about going and standing in some flash place; I wanted to live the way they did.”

“In some of the countries, what the mothers came up with foodwise and nutritionally on nothing was amazing. So the challenge is for someone to come up with a nutritional meal for under a fiver.”

According to Pope, there is nothing he loves more these days than shopping around for fresh vegetables at farmers’ markets.

“I am a bachelor so I’ve really been cooking for myself for the best part of my life and I enjoy cooking,” the 53-year-old said. “I can now do up a stir-fry and I make sure I’ve got all the vegetables in it and that it is healthy. As a judge, I will be looking for nutrition.”

Singer Celine Byrne said that what she loves to do in her spare time when she is not performing all over the world is to bake.

“I love baking cakes! So when I was asked to take part in this I said ‘yes’ straight away because I am a practising Catholic and very much involved in my religion. This is a combination of two things I love.” 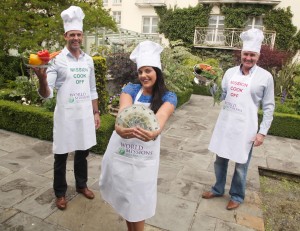 She explained that she has to be very careful about what she eats “because my instrument is in my body and I have to look after it.”

“I am not one for the gym but I do keep fit – I go for walks and I do take care of myself and make sure I eat the right foods and keep healthy because I my energy has to sustain me singing onstage for three hours at a time and long rehearsal periods of 4-6 weeks.”

Kildare GAA football star Dermot Earley is a captain in the Irish Army and has been overseas to Swaziland with another charity.

“So I’ve seen first hand what the situation is like for people in the third world; how much they do suffer.  A fiver goes a long way and I think people need to be conscious of that when they are purchasing their food,” he told contestants.

“Don’t just spend it on pizzas or luxury foods but go out and get the best value for money. Think how far your money would go overseas to feed families there as well,” he advised entrants.

Jackie Pallas, National Secretary of Missionary Children, said the ONE meal cookoff would be “lots of fun. Cooking is the new passion in Ireland and very importantly it is one that families can do together.”

“We are looking for people to devise tasty, nutritious food for a family of six for just a fiver. I know this is no mean feat but there are so many ways in which food can be imaginative. We will allow for the fact that people will have lots of spices and other bits and pieces in their cupboards and they can use all these.”

“What we want people to do is go out and shop for their main ingredients with just €5, send us on their recipes for the meals they have made and we will then have the difficult job of deciding on the five finalists.”

On a more serious note Jackie says it is one of the huge global injustices that so many people are dying from food poverty every day.
“Millions of people are going to bed hungry every night and millions more are dying from hunger. It is heartbreaking and though I’ve worked in this area for the past 14 years, I can never become immune to this terrible reality.”

“While €5 may indeed be a very limited amount for people in this country, despite our own economic difficulties, it is a lot of money for impoverished families in so many parts of the world. During my mission trips to India, Uganda and South Africa for instance I have seen families prepare meals for just 20 cents, they stretched that money in the most incredible ways.”

“We are thrilled to have support from Celine, Dermot and Brent; afterall they love food and the Irish people love them so it’ a great mix!”