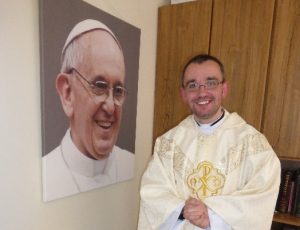 The Diocese of Killaloe has designated a priest to oversee its social media presence.

Prior to the appointment on Friday last of Bishop-elect Fr Fintan Monahan, the Killaloe diocesan administrator, Fr Desmond Hillery, announced a number of diocesan changes including the appointment of Nenagh-based curate Fr Michael Geragthy as the person in charge of its social media engagement.

According to a statement released by the diocese, “The rapidly expanding world of social media places a particular challenge on the diocese and to meet this demand. Fr Michael Geraghty will be responsible for social media and our engaging with this area.

“Fr Geragthy will be assisted by a team that he will be in charge of forming. This role is in conjunction with the Office of Communications.’’

A native of Birr, Fr Geragthy is the youngest priest in the diocese of Killaloe having been ordained in June 2015.

Meanwhile, the diocese of Killaloe has also appointed a director of pastoral development.

According to the diocesan office, “The Diocese of Killaloe recently undertook a mid-term evaluation of the implementation of the pastoral plan. Following on from the recommendations contained in this evaluation, it was decided that Crusheen parish priest Fr Ger Nash would be appointed to the role of director of pastoral development and will continue as Killaloe diocesan secretary.”

The diocese will also now have a designated healthcare chaplain in Fr Tom O’Gorman. He will coordinate the support network of Catholic Healthcare Chaplains in Killaloe.

The new clerical appointments as well as a number of clerical changes in the Diocese of Killaloe will take effect from today Monday 1 August.