Home > Featured > Social media and finances cause difficulty in marriages – Accord

Social media and finances cause difficulty in marriages – Accord

Both men and women agree that technology and social media cause difficulty in their relationships and marriages. Research also shows that the most prevalent family concerns are about finances and separation.

This is according to new research for Accord Catholic Marriage Care Service. The research is based on counselling sessions and issues raised by clients between January 2016 and December 2017 on a sample of 3,000 clients. The research was carried out by Mira Dobutowitsch, a PhD student at the Department of Education, Maynooth University.

The report was published as Accord released its 2018 figures for marriage preparation courses and relationship counselling. The statistics, published on Tuesday (12 February 2019), show that 16,048 individuals attended Accord marriage preparation courses across the island of Ireland in 2018. This compares with 15,504 in 2014. The highest number, some 17,108, attended courses in 2016.

Bishop Denis Nulty, Bishop of Kildare & Leighlin, and President of Accord Catholic Marriage Care Service CLG, blessed an engaged couple on the day of the Accord report launch in the Church of Our Lady of Mount Carmel, Whitefriar Street, where the holy relics of Saint Valentine are interred.

“The heart is very much the symbol of love and Valentine’s Day. It will feature on many a card or gift exchanged in two days’ time. The heart is at the centre of our work with Accord as we continue supporting and accompanying couples towards a deeper understanding of the gift of sacramental marriage,” said Bishop Nulty.

“The love of a married couple is a very special kind of love, a love that is life-giving, permanent and exclusive.” 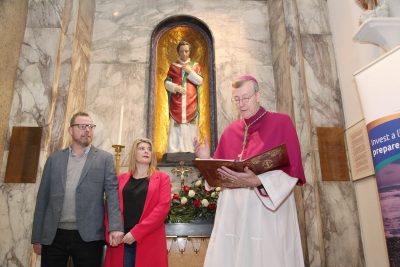 Recalling the words of Pope Francis at the same Croke Park at the World Meeting Of Families 2018 about supporting couples and families, Bishop Nulty said: “Our love and care must extend to all.”

He added: “This annual blessing ceremony allows us in Accord to reflect on the valuable contribution marriage and the family offer the wider society.”

He thanked all those who work in Accord, including facilitators, counsellors and staff.

The first Accord centre in Ireland was established in 1962 at Saint Mary’s Parish, Belfast, in the Diocese of Down & Connor. Up until recently Accord was an agency of the Irish Catholic Bishops’ Conference and operated as an unincorporated association.

Since 2017, Accord Catholic Marriage Care Service has changed its governance structure to operate as three distinct companies limited by guarantee. These companies include one to cover Northern Ireland, one for Dublin and the third for 34 centres in the Republic of Ireland and Central Office in Maynooth. In total the three Accord companies currently operate in 54 centres throughout the island of Ireland – north and south.