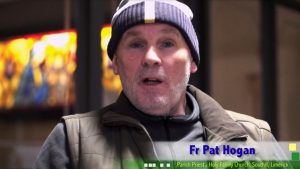 A prominent Limerick-based priest and social justice campaigner has said that the real regeneration of Limerick happened when the city was freed from the scourge of crime.

He was speaking at an Innovate Limerick conference, where the Minister for Housing, Simon Coveney TD, launched the Limerick Regeneration Implementation Plan.

The Southill-based priest, Fr Pat Hogan, said that “During my first year there (Southill), four young men were murdered. Of the four, none of them were ever in trouble with the law, bar one of them who had a traffic violation. But they were never in trouble with the law, and they were murdered in the first 12 months. And after that … many other people were murdered, so we had a lot of funerals. And what was also amazing was the [number] of anniversaries of young people who were killed, murdered. But thankfully, we have had none of that for some years.”

He continued: “The second thing that caused absolute panic was the challenge of people being burned out, especially around Keyes Park. I knew all those families. And it didn’t matter, whether you were in a walking frame or in a cot, your house could be targeted.”

He said that he was amazed at how quickly he “got used to gunfire.” He added that children in the four regeneration areas “paid an enormous price” during the dark days.

However, he added that things in Limerick city have changed dramatically, saying: “I am sorry for reminding ourselves of the dark days of when regeneration began, but I think it’s important for those who don’t know or are quick to forget where we have come from. Because we never want to go back to those days again. We want to make sure that such tellings never happen again. They were yesterday’s headlines; they are not today’s headlines. And they should not be tomorrow’s headlines.”

Referring to the Limerick Regeneration report, Fr Hogan, who stepped down as parish priest of Southill in January of this year, said that the first success of regeneration was when “people felt listened to.”

He added: “And just knowing that one life has been changed brings so much joy. Knowing that a guy who has grown up in such difficult circumstances, and knowing that that guy is going into a future that he wouldn’t have had – that brings so much great joy. And there are so many stories like that. There is a lot to celebrate.”