Ruhama has welcomed the conviction of a man for organised prostitution at Sligo Circuit Court but raised concerns that trafficking charges were not put forward in the case.

The trial of Ovidiu Pop and the sentencing of Jacob Trawoly for organised prostitution in the Sligo court resulted in a custodial sentence for Trawoly.

“We welcome the 12 month sentence handed down to Jacob Trawoly today for organised prostitution,” a spokeswoman for Ruhama said on Monday.

However, Gerardine Rowley, Ruhama’s Policy and Communications Manager, said legislation dealing with human trafficking has been on the Irish statute books since 2008 and there seems to be a failure to use this legislation to prosecute criminals and achieve justice for victims.”

She added, “We are surprised and disappointed that human trafficking did not emerge as a charge at this and some recent trials.”

The court heard the harrowing evidence of a young vulnerable woman, who was just 19 years old, when she was lured to Ireland with the promise of a better life.

She was subsequently duped into prostitution and held in debt bondage.

According to Gerardine Rowley, “This, and other cases before the courts in recent years, can only be described as ‘text book’ human trafficking cases – and it is difficult to comprehend why these criminals have not been tried under more appropriate legislation.”

However, she told CatholicIreland.net that the woman against whom the crimes were perpetrated was pleased with the sentence.

“I just spoke to her. She is happy with the 12 month sentence. She understood that the charges were not going to be in relation to trafficking, but organised prostitution. The State granted her protection which would (normally only) be afforded under trafficking law. She was glad that she came forward and that she gave evidence.”

Ruhama commended the staff at the Clarion Hotel in Sligo for their vigilance and swift action in contacting the Gardaí. Ruhama also complimented the Gardaí on how they investigated, rescued, and offered protection to the victim of trafficking.

Judge Hunt’s decision to direct an ‘in-camera’ rule while the woman was giving her evidence before the courts set a precedent according to Gerardine Rowley.

“We hope other judges will follow whenever women involved in prostitution are witnesses at trials. This ruling should encourage other women, who are victims of crimes within the sex trade, to come forward and give evidence before the courts, with the assurance of greater protection.”

In its country report on Ireland it noted that Irish authorities “initiated 56 new trafficking investigations in 2013, an increase from 37 in 2012, and prosecuted and convicted at least two defendants for human trafficking under Section 3 of the Criminal Law (Human Trafficking) Act 2008.”

Gerardine Rowley told CatholicIreland.net that legislation against  human trafficking in relation to sexual exploitation of adults for financial gain has not really been tested which she said is “disappointing six years down the line (the law was introduced in 2008).”

She hopes that the new Minister for Justice will act on the findings of the Joint Oireachtas report on trafficking and in particular that the Minister will ensure that legislation is introduced which will ensure that the buyers of sex will be prosecuted and criminalised.

Likewise, she would like to see the amendment to a law which currently allows conviction of those advertising the sex trade in the printed media but not those who use internet advertising. 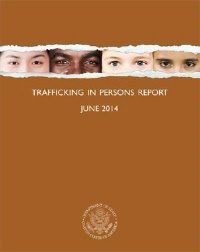 Findings of the annual US State Department’s TIP (Trafficking in Persons) Report 2014, which includes reports on individual countries across the globe, stated Ireland continued to be ranked in the top tier (Tier 1) for its compliance with the minimum standards for the elimination of trafficking.

Ruhama, along with other stakeholders contributed to the collection of data on Ireland, for this report.