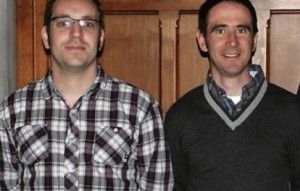 One of two new priests ordained for the diocese of Galway on Wednesday has revealed that he first considered priesthood after his sister joined the Franciscan Sisters Minoress.

Fr Michael King from Renmore in Galway city is the youngest of six. He has four older sisters and one older brother.

After school at St Enda’s Secondary School, Fr Michael’s first job was as a barman. In 1999, he went to work in Dubai for a year and when he came home he joined Galway Youth Theatre.

When his sister Shirley joined the Franciscan Sisters Minoress in England, it prompted him to reflect about his own life and vocation.

He spent six years in St Patrick’s College, Maynooth where he completed his formation and undertook several pastoral placements including spending time with retired sisters, recovering drug addicts, visiting prisons and he also taught in a secondary school.

He spent two summers working with the L’arche community in Callan, Co Kilkenny.

He was ordained by Bishop Martin Drennan with Fr John O’Halloran, a native of Killannin who has two sisters and a brother.

After finishing school in St Paul’s Secondary School in Oughterard, he continued his studies in GMIT.

He later worked as a greenkeeper in Oughterard for seven years and also worked for a short time at the Royal Melbourne Golf Club in Melbourne.

He began his studies for the priesthood in August 2009 at St Patrick’s College Maynooth. During his time in Maynooth his pastoral placements included a long stint in hospital chaplaincy.

Their ordinations took place in the Cathedral of Our Lady Assumed into Heaven and St Nicholas in Galway, on the Feast of the Epiphany.

In his homily, Bishop Drennan said that in the Year of Mercy “We are encouraged by Pope Francis to let our prayer be a real meeting with the mercy of God that dresses our wounds and heals our pain points. God wants to heal us where we are hurting, to give us the peace that makes us whole. He waits to be gracious to us.”

Speaking of the call to priesthood, the Bishop of Galway underlined that, “There is no doubt that genuine service brings its own joy, but it costs.”

“Every diocese has difficult appointments that demand courage and immense patience. The needs we have to be successful, to be liked, to avoid criticism, to be noticed, are often not met. There are many who would gladly serve God in an advisory capacity.”

“A more humble approach recognises that there is no limit to the good we can do provided we don’t mind who gets the credit. The call to serve, to be where the Lord wants us to be will always be a challenge.”