Home > News > Sisters speak out against trafficking at UN

Sisters speak out against trafficking at UN 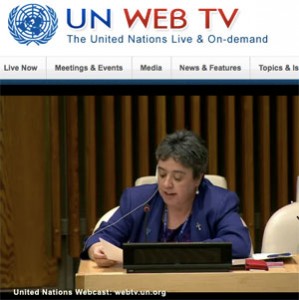 Two Irish religious sisters and an Australian have called for real solutions at a United Nations Special High Level Event on trafficking in New York.

The Mercy Sisters present were Dr Angela Reed rsm from Melbourne, Aine O’Connor rsm who lived her early years in Dublin and is now in the USA congregation and Mercy Global Action Coordinator at the UN.

Also present was Winifred Doherty RGS of the Congregation of Our Lady of Charity of the Good Shepherd representative at the UN, who joined the Sisters in Cork and her first social work took her to the heart of disadvantaged areas of the city among girls involved in street prostitution.

The three sisters were at the UN to deliver a strong and clear message to member states and policy-makers that trafficking comes for systemic oppression.

Speaking on behalf of them all, Dr Angela Reed rsm said, “In our experience, we know that trafficking for sexual exploitation is fuelled by demand and exploits vulnerability.” 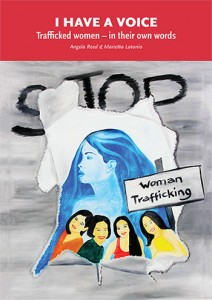 Dr Angela Reed called for a focus on prevention, whereby children’s rights to safe housing, adequate schooling, and health and well-being are realised.

Informed by trafficking survivors, Dr Angela Reed highlighted the need to heed the insights and recommendations from formerly trafficked women in order to respond with viable and real solutions.

She has had huge experience in this area, although a Melbourne Sister of Mercy, she spent seven years working in the Philippines where she met many poor people who had travelled to cities like Cebu seeking work but instead fell victim to sexual exploitation and trafficking.

She completed her PhD on social factors driving sex trafficking and the effects on Filipino women.

She and Marietta Latonio wrote a book titled ‘I Have a Voice – Trafficked women in their own words’.

Participating at the UN forms part of the advocacy priority adopted by Mercy Global Action at the UN.

Giving voice to trafficked women is a key advocacy point that the Sisters of Mercy will be promoting at the Commission on the Status of Women which will be held in March 2016 at the United Nations in New York.

The Sisters of Mercy have submitted a written statement to this commission.

In it they state, “The voices of women trafficked for sexual exploitation have been chiefly absent from human trafficking discourses and policy discussions, including agendas for international development. This is because the paradigms for understanding sex trafficking have largely been theorized within the criminalisation, international migration and economic realms.”

They added that women trafficked for sex are a “hidden population” and, therefore, difficult to meet.

“If we do not prioritise knowledge gained from women’s lived experience, we will miss vital information about the nature and human impact of trafficking.”

In addition to oral and written interventions, the Sisters of Mercy will co-host a parallel event at the Commission on the Status of Women with Good Shepherd International and Australian Catholic Religious Against Trafficking in Humans (ACRATH).

The event will take place on 17 March 2016 and is entitled ‘No Random Act: Human Trafficking and the Interplay between Systemic Oppression and the Individual Life Course’.

The event will highlight the stories of formerly trafficked women and the value that can be gained from listening to these stories.

The panel will consist of Angela Reed rsm, and two colleagues from Cebu in the Philippines, Mrs Marietta Latonio and Ms Mely Lenario.