Sinn Fein MLA says peace walls will be removed by 2023 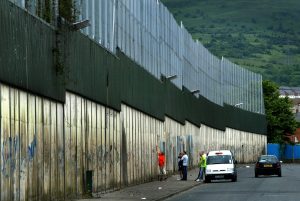 Peace walls which divide Catholic and Protestant communities in Northern Ireland are to be taken down within the next seven years according to a Stormont Junior Minister.

Addressing a festival in North Belfast run by the Duncairn community partnership alongside Progressive Unionist Party councillor Julie Anne Corr, the Newry and Armagh MLA who is the youngest member of the Stormont Assembly said, “By removing a peace wall we open a door to a new shared space and I believe we should be ambitious in our efforts.”

“Reconciliation has been hampered by physical divisions so to help build a truly shared, united and reconciled community, we need to put in place the conditions and circumstances to remove these structures.”

The first peace lines were built in 1969, following the eruption of rioting and the conflict which came to be referred to as the Troubles.

They were built as temporary structures meant to last only six months, but became a wider, longer and more permanent structure over time.

Originally few in number, they multiplied over the years, from 18 in the early 1990s to 39 peace walls and 11 gates today; in total they stretch over 21 miles (34km), with most located in Belfast.

They have been increased in both height and number since the Good Friday Agreement of 1998.

The most prominent peace lines in the past few years separate the nationalist Falls Road and unionist Shankill Road areas of West Belfast; the Catholic Short Strand from the Protestant Cluan Place areas of East Belfast; and the Protestant Fountain estate and Catholic Bishop Street area of Derry as well as in Portadown and Lurgan in Armagh.

Ms Fearon stressed that “Taking down these barriers can only happen by engaging with, by building relationships with and by seeking the consent and support of the people who live in their shadows.”

She continued, “It takes courage to engage on such difficult issues but the courage that many in the community have shown, and continue to show on a daily basis, can and will change our society for the better. Progress is been made.”