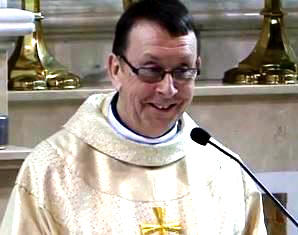 A Meath-based parish priest who became an international singing star with Leonard Cohen’s song, ‘Hallelujah’, will pay a special tribute to his hero at a carol service next weekend.

Two years ago, the parish priest of Oldcastle in Co Meath, Fr. Ray Kelly, shot to fame when he sang ‘Hallelujah’ at a wedding. The video of the event went viral and Fr Kelly has now performed all over the world.

The Concert of Carols in Oldcastle has always proved very popular with parishioners, but since Fr Ray shot to fame two years ago, the event has become a major attraction.

Speaking to the Meath Chronicle newspaper about the forthcoming Concert of Carols at Oldcastle, Fr Kelly said that “Ever since the death of Leonard Cohen in early November, many people have been asking me on my thoughts … particularly since I recorded his song ‘Hallelujah’ with the words changed to suit a wedding.”

He continued: “I remember travelling up to Castleblaney in October 2014 to perform one of my first concerts, when Christian Seitz from Vienna, the producer of my first album, ‘Where I Belong’, phoned me excitedly, saying ‘great news, great news, Ray. Leonard Cohen has agreed to allow us to put ‘Hallelujah’ on the album with the words changed to suit a wedding.’ Needless to say it was great news because that was the song everyone wanted to hear on the album. So I guess I owe Mr Leonard Cohen a big thank you for agreeing to that, and for the enjoyment it has brought to so many people as well as the enjoyment he has given through his music and poetry to the whole world.”

Fr Ray says his life has been pretty hectic, juggling work as a parish priest and concert performances, but his focus now is on Christmas in the parish of Oldcastle.

“I do hope as many as possible can come along on the night,” he said. “I will have local artist Ann Galligan with her beautiful voice, as well as my brother, Joe. Copies of my album, ‘Where I Belong’, and my Christmas album, ‘An Irish Christmas Blessing’, as well as a Christmas DVD of many of the Christmas songs recorded at the Concert of Carols last year, on the evening. It promises to be a great night, so do come along.”

He added: “May I take this opportunity to wish everyone who has stood by me and supported me a wonderful Christmas and many blessings in the New Year of 2017.”

The Concert of Carols takes place in St Brigid’s Church, Oldcastle at 7.30 pm on Sunday 18 December.