Home > Featured > ‘Silence’ to get a Vatican debut

‘Silence’ to get a Vatican debut

This year’s most anticipated Oscar-nominated movie, Silence, directed by Martin Scorsese, is to get its world premier in the Vatican.

The film, which has been 26 years in the making, tells the story of two Jesuit priests who face violence and persecution as evangelists in 17th century Japan.

In the 1600s, Japan was a ‘closed country’, and all manifestations of Christianity were banned by pain of death, but the two missionaries (played by Adam Driver and Andrew Garfield) volunteer to travel there in a bid to find their mentor (Liam Neeson), who has reportedly renounced his faith. 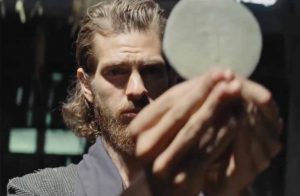 After reading the novel of the same name by Shūsaku Endō in 1988, Scorsese, now aged 72, immediately bought the rights to the movie. Since 2004, he has been saying that Silence was the one film that he really wanted to complete, and in 2014 it was reported that Scorsese said he would make no other movie until his wish was fulfilled.

It is reported that he forwent his director’s fee to make the project viable and that actors Driver, Garfield and Neeson all worked for reduced fees.

Nevertheless, this missionary epic cost US$47m to make. It was shot over eight months in Taiwan and it has a cast of 750.

When it is shown in the Vatican, most likely on Tuesday 29 November, it will be to an audience of 400 members of the Society of Jesus. Whether Pope Francis will attend the screening or not isn’t known at this stage.

Handing on the Faith – but at risk of death

Scorsese’s best known films include Taxi Driver, Raging Bull, Goodfellas, The Departed, Gangs of New York and The Wolf of Wall Street. While his movies feature a lot of violence and profanity, the themes of guilt and redemption feature strongly.

This is not the first time he has made a movie with an explicitly religious theme. In 1988 he released The Last Temptation of Christ, which was greeted by many with hostility. Mother Angelica of the EWTN satellite station described that movie as “the most blasphemous ridicule of the Eucharist that’s ever been perpetrated in this world.”

What the Jesuit fathers will make of Silence remains to be seen. It is due for general release at the end of December, and you can see a trailer here: https://www.youtube.com/watch?v=IqrgxZLd_gE