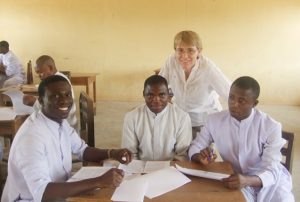 A well known Irish missionary has expressed dismay that Shaykh Umar Al-Qadri of the Irish Muslim Peace and Integration Council (IMPIC) used his position and the death of Savita Halappanavar to call for a repeal of the Eighth Amendment.

In correspondence sent to Shaykh Al-Qadri and seen by Catholicireland.net, Sr Kathleen McGarvey said the use of the “sad case of Savita” was “truly almost incredible”.

The OLA Sister said she was saddened that Shaykh Al-Qadri, as a religious leader, would use his position “to tell people how they should vote”.

She added that she was even more saddened that, as one who claims to stand for peace and respect for life, he would call for abortion.

In his statement titled ‘Guideline for Irish Muslims on the 8th Amendment Referendum’, Shaykh Al-Qadri said it sometimes takes “a tragedy to gather people’s collective focus in a manner that enables us to take the next necessary step as a nation”.

“The unnecessary death of Savita Halappanavar was one such tragedy. A responsible, proportionate outcome in the upcoming referendum on the repeal of the Eighth Amendment is the least we as a nation owe to Savita and all others like her,” the statement said.

Elsewhere, the Muslim cleric said, “Every vote in this referendum is a decision on the future destinies of women like Savita Halappanavar and of the unborn children of the nation.”

But Sr Kathleen McGarvey stressed that the “facts relating to the Savita case are quite clear” in the three reports that followed her death.

“For me, the most relevant one is HIQA’s because that body is so independent of the HSE. Nowhere in these is the Eighth Amendment mentioned as a problem but there’s a veiled reference to it at 4b in the HSE report … which is no great surprise as they were under fire and any shred of support they could gather, they did, as corporate bodies always do.”

In his statement, Shaykh Dr Al-Qadri, a renowned Islamic scholar and a leading Muslim cleric promoting an inclusive and plural society, underlined that Islam is neither exclusively “pro-life” nor “pro-choice”.

“We are taught that the soul is enjoined with the developing foetus in the second trimester, around 120 days after conception. However, this does not equate to unconditional abortion before this date. We seek to protect the rights of the unborn child, cherishing new life as a wondrous gift of God, and affirm the termination of developing new life in ordinary circumstances to be a sin and affront to human dignity.”

He said naturally, these rights of the unborn child have to be balanced with those of the mother.

“The vast majority of Muslim clerics permit, or even require, abortion in extraordinary circumstances, such as when the continuation of the pregnancy would endanger the life, health or wellbeing of the mother.”

He added, “A similar moral imperative now falls collectively to us, the Irish people. We are called to consider seriously our consciences and the lofty moral responsibility that weighs upon us as we and those around us decide how to vote in the upcoming referendum.”

“In very painful situations of pregnancies resulting from rape or incest or other such painful and traumatic experiences which you refer to, I believe we must try to put our energies and resources, not into terminating the life of the unborn child, but finding alternative solutions that support the woman/girl in her very difficult pregnancy and help her and the child after the birth, in all cases working not out of judgement but of care and compassion and communion.”

She said she wholeheartedly believed that violence begets violence and right can never result from attempting to overcome evil by another evil.

She also highlighted to the Muslim religious leader that, “The Eighth Amendment didn’t fall from the sky. It wasn’t put there by bishops or by moralists or by people who were ignorant of medicine or of society or of human rights. It was very well thought out, with compassion and care in mind for both all pregnant women and all unborn children. It is quite unique in Ireland.”

However, she warned that the media and politicians speak as though the Eighth Amendment was “a sign that Ireland is backward, behind the times, still locked in the grip of Catholic fundamentalism, repressive of women, and so on.”

“I honestly think that a law that seeks to protect life in all its forms is not regressive but is indeed the kind of law that Ireland is to be esteemed for, as a sign that our society here is just, equitable, hospitable, humane to everyone, protective of the most defenceless and vulnerable.”

“If only today’s world could learn from us and could put its resources and its intelligence and its innovations, not into the destruction of life but into providing alternatives that protect all people and all life all the time,” Sr Kathleen said.