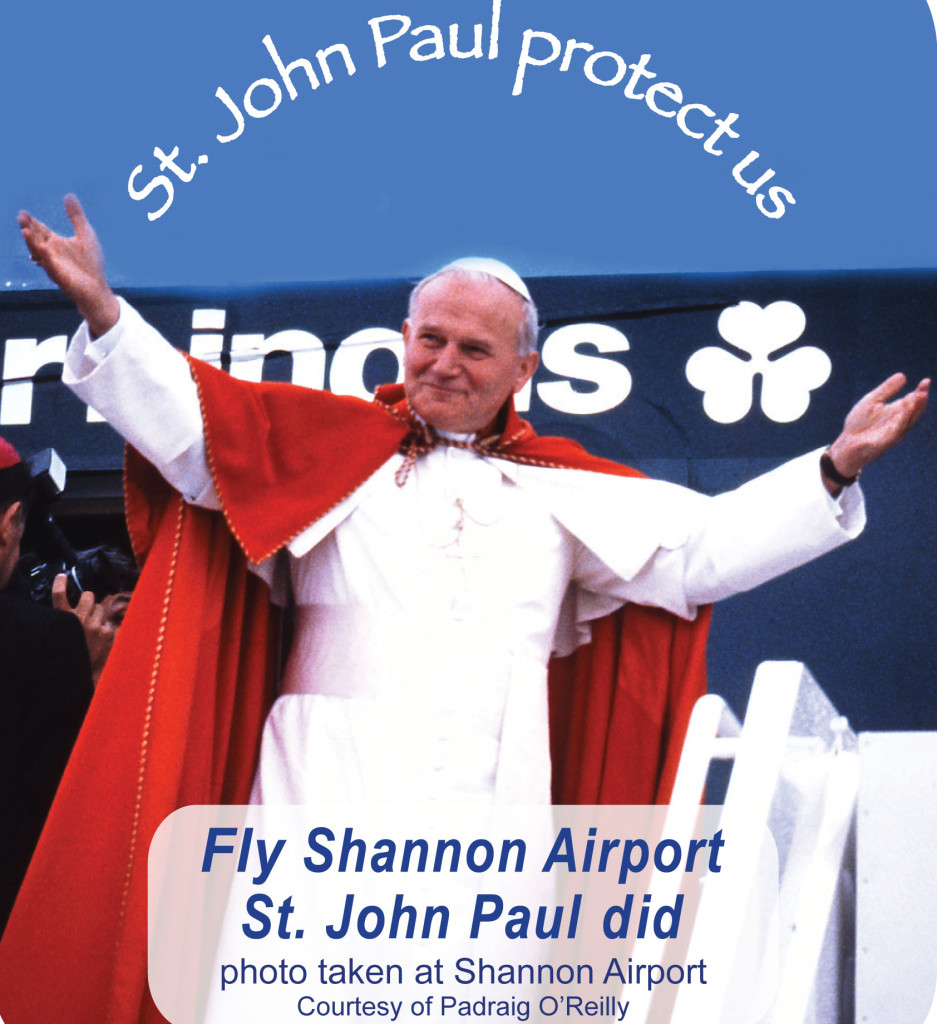 The parish priest of Shannon Co Clare has come up with a novel way of marking this weekend’s canonisation of John Paul II and at the same time boosting business for Shannon Airport.

Shannon was the last parish in Ireland that the Pope set foot in when he visited the country in 1979 and Fr Tom Ryan has printed 10,000 car stickers featuring the last recorded photo of the late John Paul on Irish soil.

The photo shows the Polish Pontiff imparting his blessing at Shannon Airport before he boarded his flight from Ireland. The sticker implores: ‘St John Paul protect us.’

The photo was taken by Shannon parishioner and local photographer, Padraig O’Reilly, while the sticker was officially launched by Bishop Kieran O’Reilly who is leading a pilgrimage to Rome for the canonisation of John Paul and John XXIII.

Fr Tom Ryan told CatholicIreland.net said John Paul II was the most travelled Pope in history. “The Saint’s protection is a source of reassurance for all who travel on our roads and in the air that they will do so in safety.”

The 53-year-old priest, who was a seminarian in Thurles at the time of John Paul’s visit to Ireland, said the sticker also encourages people to use Shannon Airport, just like St John Paul did.

On Monday 1st October 1979, John Paul left Ireland from Shannon Airport. But before he did that, he blessed the foundation stone for the new church in Shannon.

On 9 November 1980, the completed church was dedicated to SS John & Paul. The blessed foundation stone is now located in the porch of the church.

During the celebrations, Bishop Walsh blessed and dedicated the Pope John Paul II Jubilee Garden in the grounds of the church in honour of Pope John Paul’s life and ministry.

The garden consists of five stations featuring the Mysteries of Light instituted by Pope John Paul.

Shannon parish has a population of 10,000 people, many of who are either employed by the airport or in some way connected with it. According to Fr Ryan another 6,000 people come into Shannon every day to work from the surrounding towns and villages.

The car sticker initiative is a joint venture between Shannon parish and Shannon Airport. “The airport is central to what we do. When the airport does well, we do well. So it is to our mutual benefit to support the airport as well,” Fr Ryan said. 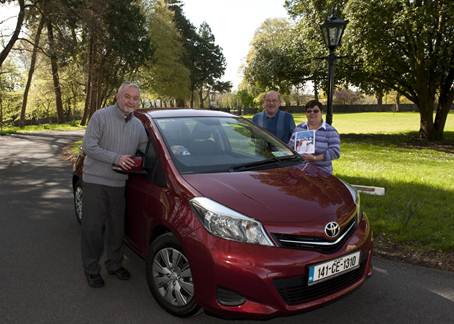 He suggested that there is a renewed emphasis on Shannon since it went independent last year and new flights are being brought on-stream.

Some of the new flights cater for the large Polish community based in the area.

Over half of the initial batch of 10,000 stickers have already been given out locally and to members of the Polish community, delighted that it recognises their beloved countryman and the link between their homeland and their adopted homeland.

After seeing John Paul in Maynooth and Galway as a young seminarian, Fr Ryan later met the pontiff twice.

“I worked as a priest in Derry diocese and in 1989 on a visit to Rome with Bishop Edward Daly I had the privilege of meeting John Paul for the first time in person.”

“In 2002, on being appointed parish priest here in Shannon, Bishop Willie Walsh led a pilgrimage to Rome that year and I had the privilege again of meeting John Paul on that occasion as well.”

Afterwards there will be a gathering in the John Paul jubilee garden in the parish.