Shalom Centre continues to make strides in peacebuilding in Africa 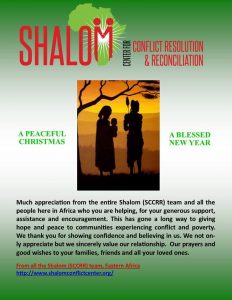 The Shalom Centre for Conflict Resolution and Reconciliation [SCCRR], which was founded by an Irish missionary priest in 2009, is continuing to make strides in peacebuilding in East Africa, its latest end of year outcomes have shown.

Founded by Roscommon native, Fr Patrick Devine, who has been a missionary with the Society of African Missions for over 25 years, Shalom works with ethnic communities and schools in conflict environments.

The Centre’s programmes operate across eight counties in Kenya in areas that border South Sudan and Ethiopia.

In transforming conflicts in Eastern Africa, Shalom Centre for Conflict Resolution and Reconciliation [SCCRR] pegs its strategy by focusing on the transformation of the root causes of conflicts rather than dealing with mere symptoms.

In 2017, Shalom conducted 83 workshops aimed at equipping influential leaders, opinion-shapers and community groups with knowledge and skills for peacebuilding.

As a way of supporting and sustaining progress towards positive peace, eight peace committees and four Natural Resource Management (NRM) committees were formed in target areas.

According to SCCRR Programme Management and M&E Departments, “The committees are a link between the people and institutions such as the government, Church, and other peace practitioners.”

The successful establishment of structures to support conflict prevention, management and resolution has been hailed as a significant development.

The peace and NRM committees supported by Shalom have played a crucial role in the implementation of intra and inter community dialogues.

These structures have been effective in the management and resolution of inter-communal conflicts.

This approach of creating community supported structures has been crucial for sustainability and increased local ownership of the peace process.

Through Shalom’s workshops during the past year, 2,094 participants in eight counties in Kenya and at the borders of South Sudan and Ethiopia were successfully trained.

Among communities in the northern Kenya, women are discriminated by cultural norms and practices in decision making within the societal structures.

In order to counter this challenge, SCCRR’s strategic peacebuilding approaches managed to achieve 42% women participation in the peacebuilding initiatives.

More than 6,500 pupils (primary) and students (secondary) have been reached through SCCRR’s Peace Education Programme.

There are more than 12 active Shalom Peace Clubs supported by SCCRR’s programme both in primary and secondary schools.

The principle behind SCCRR’s peace education for schools is to promote a culture of peace in pupils and students to communities; ultimately leading to inter-ethnic and inter-religious peaceful co-existence.

The pupils and students have been peace ambassadors who are an irresistible influence on their families that have not known peace for years.

In an interview with one of the parents, she commented, “When my children come back from school every day, they tell of their experiences of new friends from other ethnic communities whom they knew as enemies before. They now play together, sit together, share meals, plant ‘peace trees’ together… but they say, they have learnt this new way of co-existence through the peace clubs. For us elderly people, this is inconceivable but SCCRR has made the impossible possible, and we are thankful to SCCRR for the transformation we see in our children and the community.”

In 2017, SCCRR implemented 56 development projects emerging from and supporting its conflict transformation and peacebuilding interventions.

These projects have benefited more than 11,200 pupils in primary schools and 4,550 students in secondary schools.

Health centres, universities and other institutions were supplied with solar units, construction materials and microscopes.

This has created better teaching and learning environment to enhance: enrolment, retention and academic performance.

SCCRR has special preference for inter-ethnic and interreligious schools because in this way it promotes co-existence through learning and shared activities.

SCCRR development approach is participatory in the sense that the beneficiary communities contribute in the implementation process.

Furthermore, joint development has benefits of change of perceptions, shared-visions and institutional implementation at the ideological and functional project levels – this is realised in schools, markets and medical centres.

An effective early warning architecture must have the local people at the centre of it. Conflict originates from communities, however they must be empowered to know the early warning signs and respond in good time.

The impact of peace education that targets pupils and students is a long-term approach given its investment especially in terms of time, but it is more effective and has sustainable peace outcomes.

According to SCCRR Programme Management and M&E Departments, women, despite being disadvantaged by cultural norms and societal roles, are also perpetrators of conflict through the same culture.

Nonetheless, when violent conflict occurs, women are more vulnerable. Therefore, a constructive and sustainable peace process must have women at the centre.