A rare first folio of William Shakespeare’s plays dating from 1623 has been discovered in the provincial French town of Saint Omer and has re-opened the debate over whether the Bard was Catholic.

The folio is one of only 230 believed to still exist.

It had been in the library at Saint Omer for 200 years but was mistakenly believed to be an 18th century edition.

Last September, medieval literature scholar Rémy Cordonnier was searching for books to use in a planned exhibition of Anglo-Saxon authors when he came across the 1623 folio.

“It had been wrongly identified in our catalogue as a book of Shakespeare plays most likely dating from the 18th century,” he said.

He contacted Shakespearean expert, Professor Eric Rasmussen of the University of Nevada, who came to see the book and identified it as a first folio.

The book is originally believed to have contained 300 pages but there are reportedly about 30 pages missing as is the title page.

In an interview, Rémy Cordonnier explained that “One of the most interesting things about the book is that the Henry IV play has clearly been performed because there are notes and directions on the pages that we believe date from around the time the book was produced.”

It was edited and published seven years after the Shakespeare died by his colleagues John Heminges and Henry Condell.

It includes almost all of the plays widely accepted to have been written by Shakespeare and is credited with being the reason his literary legacy survived.

In the 16th and early 17th centuries, Saint Omer was a sanctuary for religious and priests fleeing persecution in England. 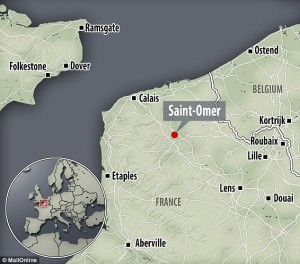 The Jesuits had a particularly strong presence in the town.

The first folio is thought to have been brought to France during that era and held in the Jesuit library until the French Revolution when the Jesuit’s collection was confiscated and used as the basis for a public library.

The Jesuit connection will provide those who believe Shakespeare was a covert Catholic with an impetus to examine any possible evidence as to how this rare book came to be in the possession of the order.

Speaking to Agence France-Presse Professor Rasmussen said, “What is really interesting is that it clearly came from the college of Jesuits in Saint Omer, founded in the late 16th century during Queen Elizabeth I’s reign when it was illegal for Catholics to go to college.”

The folio was also inscribed on the first surviving page, Professor Rasmussen said with the name ‘Neville’, an alias for a prominent English Catholic who attended the Jesuit college.

“People have been making some vague arguments” about Shakespeare being Catholic, he told the Times newspaper, “but now for the first time we have a connection between the Jesuit college network and Shakespeare. … The links become a little more substantial when you have this paper trail.”

The First Folio will not go on general display, but will be scanned so it can be consulted on the library website and will be available for other libraries and museums to borrow, he said.