Seven bishops martyred by Romanian Communists to be beatified tomorrow 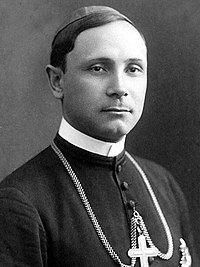 Pope Francis will beatify seven modern-day martyrs this Sunday during a visit to Romania.

The martyrs were Greek Catholic bishops who died between 1950 and 1970 while being held prisoner by Romania’s former Communist regime.

They are Valeriu Traian Frentiu, Vasile Aftenie, Ioan Suciu, Tito Livio Chinezu, Ioan Balan, Alexandru Rusu and Iuliu Hossu. In March this year, Pope Francis declared that they had been killed “in hatred of the faith”.

The last of these, Bishop Hossu, spent many years in solitary confinement, before dying in hospital in 1970. A year before his death he was named a cardinal in pectore – that is, he was a secret cardinal, whose ecclesiastical status was not made public in order to save him from further persecution.

On his death bed, Bishop Hossu’s last words were: “My struggle is over, yours continues.”

Relations between the Romanian Orthodox Church and the Roman Catholic Church are good and both pray for Church unity. When Pope Francis met Patriarch Daniel and his brother bishops, he did so in a recently built Orthodox cathedral that was part funded by a gift of US$200,000 made by Saint Pope John Paul II when he visited Romania in 1999.

When Pope John Paul II visited Romania, it was 10 years after the fall of the Communist dictatorship of Nicolae Ceausescu, and the Polish pontiff was given a rapturous welcome. It was the first visit by a Roman pontiff to a country with a majority Orthodox population, and it was judged a great success.

Catholics form 5 per cent of the Romanian population. Most of these belong to the Greek Catholic Church, with Latin-rite Catholics being predominantly recent immigrants to the country. When Pope Francis beatifies the seven martyrs tomorrow in Blaj in Transylvania, he will do so during an Eastern rite Divine Liturgy.

The papal visit to Romania will be watched closely by members of Ireland’s Romanian community, which numbers more than 29,000 people. Romanians form Ireland’s fourth largest non-Irish ethnic minority, but they are the fastest growing of the 10 biggest populations of non-Irish living in Ireland. In Ireland, 69 per cent of Romanians are Catholic.