They call themselves the ‘Servant Sisters’, and today marks the day when they will be officially ‘missioned’ for service in the parish of the Sacred Heart, Roscommon and the diocese of Elphin.

Bishop Kevin Doran will be chief celebrant at the Mass, which will mark the opening of the first house of the Servant Sisters of the Home of the Mother in Ireland.

The Servant Sisters of the Home of the Mother began in the 1980s and only received its ‘Definitive Decree of Approval’ as an International Public Association of the Faithful last year. It involves women religious, brothers, priests and lay people.

The sisters come from Spain, but have already attracted Irish people to join them, notably Sr Clare Crockett (33), who died in an earthquake in Ecuador on 16 April 2016.

Before joining the order, Clare, who came from Derry, was an actress. She said that she announced plans to join the order “with a beer in one hand and a cigarette in the other”.

She and another Irish nun injured in the earthquake, Sr Thérèse Ryan from Co. Limerick, had been teaching guitar and singing with five young women postulants who were entering the order at Playa Prieta when the earthquake struck.

The five postulants also died in the earthquake, which measured 7.8 on the Richter scale. The earthquake killed at least 480 people, and left more than 4,000 injured and hundreds missing.

Marking the first anniversary of her death last month, four Spanish sisters from the order travelled to visit her grave in Derry and took part in a memorial Mass at St Columba’s Church, Long Tower before travelling on to Sligo to begin preparations for the opening of their new base in Ireland, which will be at the Sacred Heart parish in Roscommon town.

Local priest Fr John Cullen told CatholicIreland that they were delighted to have the sisters in the parish. “Any sign of new life is a cause of joy,” he said, noting that the Sisters were beginning their ministry in Roscommon “just after Vocations Week” and “on the hundredth anniversary of the feast of Our Lady of Fatima”. 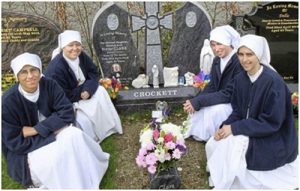 Sisters Bernadette, Ruth Maria, Michelle and Karen from the Home of the Mother Order visiting the grave of Sister Clare Crockett (Picture by Margaret McLaughlin and Seamus McKinney).

The sisters say the new convent will be in honour of Sr Clare, whose life story is to be told in a film to be released later this year, All or Nothing: Sister Clare Crockett.

The Servant Sisters of the Home of the Mother began in 1984, when three women began to privately live a new form of consecrated life after a pilgrimage during which they visited several shrines throughout Europe.

Five years later, the three women – Mother Ana, Sister Reme, and Sister Conchi – made their first private vows of chastity, poverty and obedience for three years in Nazareth in the Holy Land.

They established their foundation in Spain, and since then the order has grown and spread. Today there are more than a hundred Servant Sisters of the Home of the Mother from eleven different countries: USA, Spain, Ecuador, Ireland, Italy, Canada, Nicaragua, Mexico, Czech Republic, England and Singapore.

They have sixteen communities – eight in Spain, three in Italy, one in the US, three in Ecuador and now a community in Ireland. The order works with young people, running youth retreats and camps.

The opening Mass establishing their Irish base takes place this evening at 7.00 pm at the parish of the Sacred Heart, Roscommon.