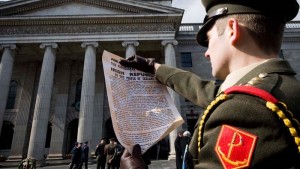 There is no room for “historical retrospect or for sentimental hagiography” in the centenary year of the 1916 Rising “if it is conceived of as a sort of political selfie”, the Church of Ireland Primate said on Easter Sunday.

In his homily at Sandford Parish Church in Ranelagh, Archbishop Michael Jackson said there was no good reason to let historical retrospect or sentimental hagiography dictate the future to and for us – uncritically.

“We recognise what has been; we seek to comprehend it; we need to keep interpreting it and not spend our time reminiscing about it,” he said.

In an Ireland which is increasingly diverse, there was room for the old and new, the Archbishop suggested.

He warned that the rest of this world was watching – “on its TV, its iPad, its iPhone or on any other device available to it – the way in which we are or are not dealing with a past that in many ways still dictates the present”.

The Church of Ireland Primate said the same world was watching out for the hopes for the future to which our leaders in public life on Sunday and for the rest of this year give voice.

“Following wave after wave of Troubles in some shape or form almost every decade since 1916, each iteration of Troubles-life in Ireland has given us a legacy soured by a disrespect for the Other and a predilection for turning the neighbour into the enemy,” the Archbishop criticised.

He said both security and revolution were good to think about on a day when people throughout the Republic of Ireland were commemorating The Rising. So were words like memory and commitment.

“Ireland in 2016 and beyond would have ‘more religion’ by accommodating the cultural and religious ways of others,” the Archbishop suggested.

However, he noted that revolution always created displacement and regularly required violence as witnessed in Brussels this week, while security regularly breeds generalised indifference, he said. “But, if we work at it as a civic duty, it also engenders carefulness of others and ecology of the things of God.”

The senior churchman said people in 1916 were “battling exploitation, social exclusion, poverty, squalor, indignity and colonialism; they too in their day were offered the Revolution with all of its ambiguities and selectivities, its idealisms and its integrities, its hopes of freedom and its power-grabs”.

“Most especially they were offered the hope of something new, something independent, something of the future.”

“We in Ireland know that there remains to this day the unfinished business of revolution: and that is the work of connecting romantic idealism, interdependence on our nearest geographical neighbour and radical social inclusion with a newly envisioned future – if the Revolution of 1916 is to be more than a tableau of self-applause, a ghostly echo of our own sense of political bravado.”

“As members of our society, we as Christian people and as members of the Church of Ireland are called to seek and to serve God, to nail our colours to the common good and to play our part in ushering in the Kingdom of God through service and through leadership at every point in the compass.”

“In this sense, the Revolution is still to start,” Archbishop Jackson commented.