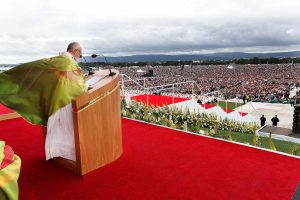 “The stormy weather on Sunday, the dark clouds and the sun struggling to shine through, were symbolic of the shadow of abuse hanging over the Church, and not just here in Ireland,” Bishop Leo O’Reilly of Kilmore has said.

In a statement on Tuesday in response to Pope Francis’ visit to Ireland for the Ninth World Meeting of Families, the Bishop of Kilmore described the visit as “a huge success”.

Referring to Pope Francis’ humility and forthrightness in acknowledging and begging forgiveness for the sins of the past and his moving Penitential Prayer at the Mass in the Phoenix Park, Dr O’Reilly said it encouraged him to hope that the Pope will introduce the necessary structures of accountability to ensure that child safeguarding will be an integral part of church life, not just here in Ireland, but throughout the Church across of the world.

“I am deeply conscious that such an objective is a huge challenge for the Universal Church. From our experience here in Ireland, we know well that it takes time to effectively establish the kind of robust procedures and practices that are now embedded in our own parishes,” he said.

The two-day pilgrimage wasn’t so much a visit to Ireland, but to attend events associated with the conclusion of the five-day celebration of the World Meeting of Families. The Pope’s visit, he said, was the crowning event of the 2018 meeting.

The three-day Pastoral Congress on the Family in the RDS in Dublin saw attendances of 37,000 people a day, the largest ever Congress in the history of the World Meeting of Families. 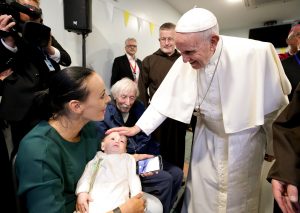 Bishop O’Reilly also recalled the significance of the Pope’s visit to the Capuchin Day Centre in Dublin to meet, listen to, speak with, and bless the homeless, the Capuchin clergy and their staff, and his meeting with survivors of church abuse.

“I very much welcome that Pope Francis spent 90 minutes meeting with survivors of abuse during this the first day of his pastoral visit,” he said.

Of the Festival of Families in Croke Park on Saturday evening, the Bishop of Kilmore remarked, “That event embodied for me the whole message of the week and it was a real privilege to have been present there. The Festival put flesh on the 2018 theme of the World Meeting of Families which was, ‘The Gospel of the Family: Joy for the World’.”

He said that at the Festival of Families, the sense of joy and exuberance was “unbelievable”.

“It was a wonderful occasion and a spectacular show. A variety of families spoke to the capacity audience about their experience of being families inspired by their Catholic faith. These testimonies were interspersed with beautiful music and dance to provide an unforgettable and truly uplifting spiritual experience.” 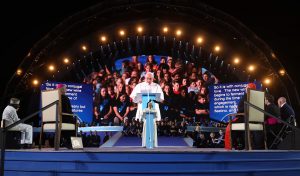 Pope Francis’ address, he said, engaged with the contributions from the families and combined profound spiritual insights with very down to earth, practical wisdom.

The words and actions of the Holy Father challenges each of us to move forward with courage, with hope, with humility, with penitence, with joy, and most especially with love.

One of those who attended the Festival of Families in Croke Park was Declan Kelly, who was there with his two children, his wife and his mother.

When the Pope was leaving Croke Park, the Pontiff grabbed the hand of Declan’s six-year-old son James Patrick, who was sitting on his father’s shoulders.

“Pope Francis held his hand; it was a proper clasp and he went out of his way to do it. It is an extremely special experience and I am very emotional,” Declan told Catholicireland.net on Saturday night. 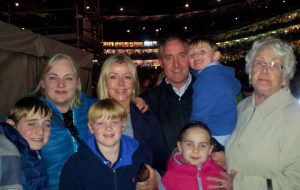 “I had seen a few things about him on YouTube such as when he stopped his car to get out and talk to people on the side of the road. Obviously, he is God’s representative on our planet, but he just seems like a good normal person – like us.”

Asked what he took away from the Festival of Families, he responded, “It is all about the family – that is life. We have three generations here today. When my dad sadly passed away 30 years ago, my Mum took it extremely badly. I think her faith kept her going at the time. She is quite religious and came up from Leitrim last night to be here this evening.

“We have been talking about this since we heard Pope Francis was coming to it. My Mum wanted to be here. I bought tickets to go to the RDS to be guaranteed to get tickets for this Festival of Families.” 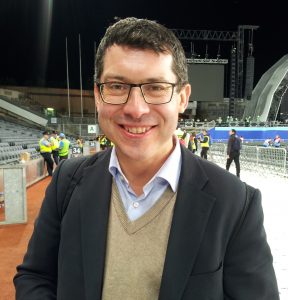 “I think we saw the best of the Church there with those wonderful families who spoke about their extraordinary witness, through the ordinary things of life. I think that is encouraging for many people and all in a setting of great camaraderie with the best of Irish music and cultural traditions. It made me very proud of our own traditions as well.”

He said he was “really impressed” by the Pope’s words.

“He is not a man who hesitates to encourage people to get the simple things right in terms of prayer in the family and courtesy to each other. He gives good practical advice.

“I think this evening will have helped people to see how beautiful the Church’s message is for all families.”

He said the family testimony he was most struck by was that of the family of Fr Ragheed Ganni who was killed by Islamist extremists in Mosul in Iraq in 2007.

“I had the privilege of being in the Irish College in Rome where Fr Ganni lived when he was studying in Rome. He is now permanently commemorated in a beautiful mosaic on the wall of the college chapel. It was lovely to be reminded of his story; perhaps many people in the crowd wouldn’t have known that he had a particular connection with Ireland, so it was touching to see his family and it was a reminder to us – we have our fights and our squabbles here, but really we live in such a privileged part of the world.”

“I’ve always been so struck by meeting Catholics and Christians from other parts of the world where they really suffer for their faith.” 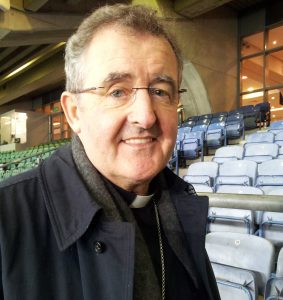 For Bishop William Crean of Cloyne the atmosphere in Croke Park was tremendous.

“I thought Tyrone Productions were really creative in drawing from Irish tradition and the diversity of people that are now part of the country – they pulled that together very well and they integrated the witness stories very well. It was a fabric that was well woven.”

He said Pope Francis preached for longer than he had expected but he keep people’s attention and there were key moments when he brought humour into it, highlighting all the joys of family life with all the struggles.

Pat and Brid Clarke from Malahide in Dublin felt that the Pope spoke to them as a couple marking their fiftieth wedding anniversary. 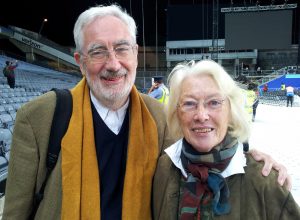 Brid told CatholicIreland.net that the couple have three children and two grandchildren. “We have been celebrating the anniversary ourselves and the love that we are getting from our family!”

Pat explained that since their grandchildren were born, “We’ve been experiencing a different sort of relationship with our children; they seem to have gone out of their way to involve us.”

Pat was disappointed that there wasn’t more on Saturday night about the “different types of family” and that the focus was on the Catholic understanding of family.

There was, he said, “no recognition at all of the changes that are taking places which are very necessary”.

He said the changes in the laws in Ireland had brought “a new confidence” to the Irish people and he as “very happy about that”. 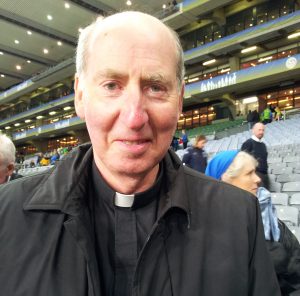 He also paid tribute to Pope Francis’ energy and his practical words on forgiveness.

As someone with hearing difficulties, Brid was delighted with the display screens which showed the Pope’s words.

Bishop Denis Brennan from Ferns described the atmosphere as “terrific” and very positive.

It was a lovely evening full of youngsters, families, music and song. The Holy Father was amazing considering the long day that he had and having been up to so early. It was wall to wall for him. It was great to see him in such good form. He is a great example to us all.”

From the Pontiff’s address, Bishop Brennan said what struck him was the importance of family.

“There is no such thing as the perfect family – we are all a work in progress – it is not easy for anybody. He highlighted the importance of knocking on the door when there is a row and asking ‘can I come in’ – people will identify with that. He is able to break down very important ideas into very simple language.”

Sr Marie O’Halloran (77) of the Jesus and Mary Sisters paid tribute to how beautifully organised the evening was.

“Everything flowed so beautifully. The Pope’s address on the family and family life was very moving,” she said.

The retired missionary who served in Africa said the family testimony that stood out for her was that of the family from Burkino Faso who spoke about forgiveness.