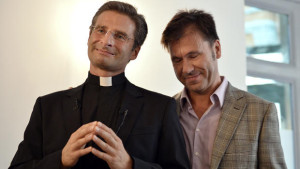 Mgr Krysztof Olaf Charamsa (L) who worked for the CDF gives a press conference with his gay partner Edouard with whom he has been in a relationship. Photo TIZIANA FABI/AFP/Getty Images)

The Vatican reacted swiftly on Saturday to the shocking revelations by a high-ranking Vatican official at the Congregation for the Doctrine of Faith that he is in a gay relationship.

Vatican spokesman, Fr Frederico Lombardi, indicated that 43-year-old Polish Monsignor Krzysztof Charamsa would no longer have a job at the CDF where he has worked since 2003.

He had also been serving as assistant secretary of the International Theological Commission and teaching theology at two of Rome’s Pontifical universities, the Gregorian and the Pontifical Athenaeum Regina Apostolorum.

In his statement Fr Lombardi said, “The decision to make such a pointed statement on the eve of the opening of the Synod appears very serious and irresponsible, since it aims to subject the Synod assembly to undue media pressure”.

He added that Mgr Charamsa, “will certainly be unable to continue to carry out his previous work in the Congregation for the Doctrine of the Faith and the Pontifical universities, while the other aspects of his situation shall remain the competence of his diocesan Ordinary”.

In an interview in Saturday’s Corriere Della Sera, Mgr Charamsa declared himself gay and at a press conference in Rome he was flanked by his gay partner, with whom he has been in a relationship despite his vow of celibacy.

The Congregation for the Doctrine of Faith is notedly hardline on communion for the divorced and remarried, on Irish priests such as Fr Tony Flannery and women religious in the US.

It has been headed up by Pope Emeritus Benedict XVI and Cardinal William Levada, who was recently arrested for drink driving in the US.

Explaining his decision to come clean, Mgr Charamsa said, “I want the Church and my community to know who I am – a homosexual priest, happy and proud of his own identity.”

“I am ready to pay the consequences of this but the moment has come for the Church to open its eyes to gay believers and to understand that the solution which it offers to gays, namely total abstinence from a love life, is simply inhuman.”

He also attended a meeting of the Global Network of Rainbow (LGBT) Catholics in Rome which was addressed by former Irish president Mary MacAleese on the theme of “Catholic Encounters with LGBT People and their Families”.

Mgr Charamsa said on Saturday that there was a day when “something breaks inside you”, adding that God guided him to this decision, “which should be the most simple for any homosexual”.

“I will personally reveal my identity to the Holy Father with a letter. And I will inform the universities where I teach as to who I am. (I do this) with immense regret since I will probably no longer be allowed to teach in Catholic schools.”

In relation to the Synod, Mgr Charamsa said, “I would like to tell the Synod that homosexual love is a family love and one that needs the family. Every person, including gays, lesbians, transexuals desire love and a sense of family.”

“I think that on these issues (homosexuality), the Church is way behind in relation to the level of understanding reached by humanity”.

Charamsa told reporters that the timing of his disclosure was not related to the synod, but added that he hoped it might add “a Christian voice” to the synod debate.

He said he has written a book in Italian and Polish to “lay bare” his experience “in front of all those who want to confront me.”

Charamsa told the Polish daily Gazeta Wyborcza that he was motivated to make his sexual orientation public by hate mail that he received after publicly criticising a right-wing Polish priest who is strongly anti-gay in the Catholic weekly Tygodnik Powszechny.