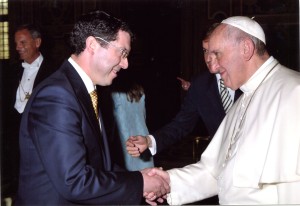 Independent Senator Rónán Mullen was part of a delegation of Catholic politicians who met with Pope Francis on Sunday.

The Pope urged the group of about 80 politicians from all over the world to resist the “throwaway culture that rejects unborn children, older people and the unemployed”.

The politicians were attending a conference of the International Catholic Legislators Network which meets annually in Rome. This year’s gathering focused in particular on the persecution of Christians in the Middle East.

The participating politicians also discussed the human rights and needs of international migrants in the current crisis.

Senator Mullen will introduce debates on the persecuted Christians and the migration crisis in the Seanad over the coming weeks.

Speaking to CatholicIreland.net, Senator Mullen said he thanked the Pontiff for his “courageous witness to the dignity of every human person”.

Speaking in Italian, the Senator also told Pope Francis it would be lovely to see him in Ireland.

The International Catholic Legislators Network was founded in 2010 by Cardinal Christoph Schönborn of Vienna and the British parliamentarian Lord David Alton, to discuss the promotion of Christian values and morals in the political arena.

In his address to them, Pope Francis urged the Catholic legislators to be protectors of human life, calling them to “be strong” against a throw-away culture marked by Christian persecution, and the rejection of the unborn and migrants.

Members of the International Catholic Legislators Network presented the Pope with a document outlining their commitment to promoting life in their respective nations, especially in areas of abortion, Christian persecution, and migration.