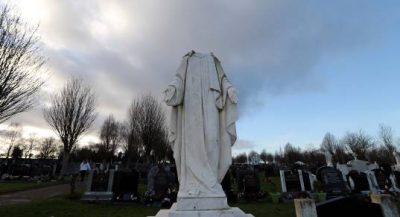 Cork City Council has increased security at St Catherine’s graveyard in Kilcully following the desecration of up to 20 graves there last Thursday night.

Gardaí are examining CCTV footage in the hope of identifying those responsible for the vandalism.

The extensive damage to the 20 gravestones left a number of relatives of those buried in the cemetery shocked and in tears.

Meanwhile, a public meeting to discuss the vandalism is to take place on Saturday at 2pm in the Commons Inn in Cork city.

According to Cork City Council, which manages the cemetery, around-the-clock security patrols are now in place to protect the thousands of headstones in Kilcully.

A spokesperson for Cork City Council said, “There have been a number of smaller incidents of vandalism of graves in that cemetery over recent months but we have never seen anything on the scale of damage that we witnessed last Friday morning. It is very regrettable and understandably very upsetting for the families involved.”

The previous attacks are believed to be linked to a local feud.

According to the Examiner, campaigner on behalf of the elderly, Paddy O’Brien, whose wife is buried in St Catherine’s, visited the graveyard over the weekend and said he had never seen so many people upset.

“It’s an awful sight. The place was packed. I’m going to hundreds of funerals here and I’ve never seen so many people upset, crying with tears.”

“It’s appalling. I was looking at one grave, I spoke to the family. Her wish was that she would be buried under a tree. The whole thing is gone, destroyed. They’ve taken away the stone.”