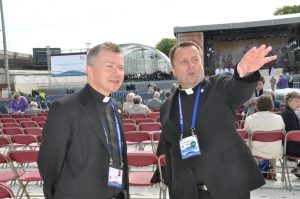 The director of public and social affairs in the Diocese of Down & Connor, who is also Secretary to the Northern Bishops, has been chosen for the role of Secretary General for the World Meeting of Families.

Fr Timothy Bartlett will oversee and co-ordinate the planning and running of this major international church event which will take place in Ireland from 22 to 26 August 2018.

The Irish Bishops Conference on Thursday welcomed the appointment as they concluded their summer general meeting in Maynooth.

The office of the secretary general will be based in Clonliffe College, Dublin.

Last month, it emerged that the General Manager of the International Eucharistic Congress in 2012, Anne Griffin, had been appointed as General Manager for the World Meeting of Families 2018.

On 25 May, the Vatican announced that Pope Francis had chosen The Gospel of the Family: Joy for the World as the theme for the event in Dublin.

The first of three national collections aimed at defraying the cost of hosting the 9th Meeting took place in parishes across the country in May.

This year’s collection will be followed by another national collection next year and a final one in 2018.

The Meeting is expected to attract thousands of Catholic families from around the world to Ireland.

There has been speculation since the Pope announced his decision last September that Ireland would host the event that the Pontiff travel to Ireland for the occasion.

However, no confirmation of the Pope’s intentions to visit or not will become clear until 2017.

The World Meeting of Families was a pastoral initiative of St John Paul II who intended it to be an international event of prayer, catechesis and celebration.

It seeks to strengthen the bonds between families and to bear witness to the crucial importance of marriage and the family for all of society.

The World Meeting also fosters gestures of solidarity for families in difficulty.

Held every three years, and coordinated by the Pontifical Council for the Family, it is the largest universal gathering of Catholic families and brings together families from all over the world in faith and celebration.