Second successor of St Josemaria is laid to rest 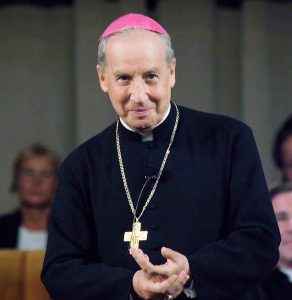 The recently deceased Prelate of Opus Dei will be remembered at a special Mass in Dublin Saturday 17th December at which the Papal Nuncio, Archbishop Charles Brown, will preside. Bishop Javier Echevarría Rodríguez died in Rome last Monday 12 December after a short illness. He had been hospitalised just a week earlier because of an infection in his lungs.

The bishop was the second successor of St Josemaria Escrivá, Opus Dei’s founder, and was elected Prelate after the death of Blessed Alvaro del Portillo in 1994. The following year he was ordained bishop by St John Paul II in St Peter’s Basilica.

Speaking to CatholicIreland.net, Paul Harman from Opus Dei said that although the death of Bishop Echevarría (84) was unexpected, members of Opus Dei were consoled by the fact that he had died on the feast of Our Lady of Guadalupe, to whom he had a great devotion. In fact, during a visit by St Josemaria Escrivá to her shrine in 1970, the then Fr Echevarría, who was his secretary, was able to write down St Josemariá’s prayers at the shrine, preserving them for posterity.

According to Mr Harman, Bishop Echevarría, who was buried on Wednesday, would be remembered for his “extraordinary fidelity to the Church and to the Pope”. Mr Harman had met him on several occasions. “He was a man of tremendous faith. Whatever problems came up – he would leave them in God’s hands. In the last couple of years he emphasised the need for optimism. Like Saint Josemaria, he said ‘We are children of God, we must act as children of God’.”

He was affectionate and sharp witted, said Mr Harman, and very approachable.

Requiem Mass Saturday 17th December for the repose his soul will be celebrated by Fr Justin Gillespie, Vicar of Opus Dei in Ireland, at 12.00 noon at the Church of Our Lady Queen of Peace, Merrion Road, Dublin 4.

Opus Dei has around 90,000 members worldwide. Under the leadership of Bishop Echevarría, the Prelature focussed on evangelisation in the areas of the family, youth and culture. He oversaw the beginning of Opus Dei’s stable formational activities in sixteen countries, including Russia, Kazakhstan, South Africa, Indonesia and Sri Lanka, travelling to all the continents to stimulate the evangelising work carried out by members and friends of Opus Dei.

During his time as leader, he encouraged the founding of many institutions dedicated to immigrants, the sick and the marginalised, and he gave especial attention to a number of centres for the care of the terminally ill.

Bishop Echevarría was born in 1932 in Madrid, where he met St Josemaria Escrivá. He was St Josemaria’s secretary from 1953 to 1975 and later appointed secretary general for Opus Dei. A year after his election as Prelate, he was ordained bishop by St John Paul II in St Peter’s Basilica.

The successor to Bishop Echevarría will be elected by a congress of Opus Dei within the next three months. It is expected that seven or eight delegates from Ireland will attend the congress for the election. In the meantime, the auxiliary vicar, Monsignor Fernando Ocariz, will act as leader. For the new prelate to take office, Pope Francis must confirm the appointment.