Home > Featured > ‘Seamus Mallon was a giant of his time’ 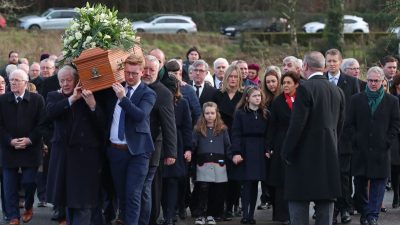 Mourners attending the funeral Mass of Seamus Mallon in Co Armagh on Monday were told he was “a giant of his time”.

In a reflection on the politician’s life, his friend Tim O’Connor, who is a former Secretary General to the President of Ireland, told the congregation gathered in the Church of St James of Jerusalem in Mullaghbrack it was important to reflect on, and give thanks for, “the sacrifice, endurance, courage and leadership of a man whose contribution has meant a better life and future for every single one of us on this island”.

He told family, friends, politicians from North and South, that a friend had said of Mr Mallon’s contribution: “weren’t we blessed at a time of such darkness and bleakness that a giant like Seamus Mallon rose up from among us and showed us the way”.

Fr Michael Woods, parish priest of Tandragee, speaking at the opening of the funeral Mass described Stormont’s former Deputy First Minister and the former deputy leader of the SDLP, who died on Friday aged 83, as “a man of deep faith” and added that it was Mullaghbrack parish’s privilege to host the final liturgical and scared moment of Mr Mallon’s long, full and rich life here in the place of profound importance to him.

Fr Woods revealed that it was Seamus Mallon’s “personal wish” that his funeral take place in the church in which so many sacred moments in his life and that of his family were marked and celebrated, including his own baptism over 83 years ago.

He added, “We are very proud in this parish of the many achievements of Seamus Mallon and the enormous contribution he made to peace and reconciliation on our island. For that reason, we are particularly pleased that several representatives of other Christian denominations have joined us to say their farewells, and pay their tributes to a man who placed huge store by the holding out of the hand of friendship.”

He welcomed Seamus Mallon’s family: his daughter Orla, his son-in-law Mark, his grand-daughter Lara, his sisters Maura, Jean and Kate, his brother-in-law Joe, and his nieces and nephews and their families.

The Mass was concelebrated by Cardinal Seán Brady, Archbishop Eamon Martin, and other members of the clergy.

Mourners included the Deputy Lieutenant of Co Armagh representing the Queen, the Aide de Camp to President Higgins, the Taoiseach, the Tánaiste, the NI Secretary of State, the Mayor of Armagh, Banbridge and Craigavon, the First Minister and Deputy First Minister, MPs, US Consul General, Ministers, Speaker of the Assembly, MLAs, TDs, Senators, Councillors and public representatives from the North and South, past and present, as well as a large circle of friends and admirers.

The first gift brought to the altar was a copy of Seamus Mallon’s memoir, A Shared Home Place which he published last year. It was brought forward by journalist Andy Pollak who collaborated with Mr Mallon in writing the book.

In his homily, Archbishop Eamon Martin highlighted how Seamus Mallon was determined to make a real difference, and to leave the world a better place than it was when he entered it.

“People sometimes speak of the ‘noble vocation of politics’. Seamus Mallon was a shining example of someone who gives their life in a vocation of service,” Archbishop Martin said.

“As a committed Christian, he prayed daily the words of the Lord’s Prayer – ‘Thy kingdom Come; Thy will be done on earth as it is in heaven’. And his prayer led to action, as he used his many gifts to build up God’s kingdom in the world – a Kingdom of truth and life, a Kingdom of justice, love and peace.”

The Gospel Reading chosen for the Mass was the Beatitudes and the Archbishop said these were Seamus Mallon’s pattern for living: “Blessed are the peacemakers; blessed are those who are persecuted in the cause of right – theirs is the Kingdom of heaven”.

He noted that in recent days many commentators had spoken of Mr Mallon as a man of integrity and courage who was unafraid to speak up or call it as it was – even at great personal risk. “He has been described as fair and principled, and as always respectful of the rights of others.”

Visitors to his wake had shared stories of his astute leadership and tough negotiating skills, and also of his “stubborn” determination and no-nonsense directness at times.

But many others, who had known him in a personal way, had spoken of him as a devoted father, grandfather, brother, and as a faithful friend.

“Seamus enjoyed good company wherever he could find it – whether it was fishing on Lough Inagh, or golfing in Rosapenna, or watching a match, or putting on plays and shows, pottering around the garden, playing with his faithful dog Jesse, or savouring a ‘creamy pint’ or glass of whiskey with his friends.”

He was a “people person” and whether he was with presidents, prime ministers, party colleagues, or his own good neighbours and friends in Markethill, he was the same.

“He had an amazing capacity to remember people. Despite all the distractions of national importance, still his loving care for Gertrude, his “doting” dedication to Orla, Mark and Lara and his affection for his sisters, nieces, nephews and extended family remained steadfast.”

“Like Heaney he saw the ongoing bloodshed of the past as a ‘waste of life’ and a ‘waste of spirit’. He empathised from his heart with all those who were suffering and his consistent condemnation of violence from whatever source often left him open to insult and unfair criticism. But his principles, rooted in a strong faith and in an unstinting commitment to a culture of life, remained steadfast in face of such opposition.”

In his reflection on the life of Seamus Mallon, Tim O’Connor said that in the late 1960s and early 1970s, Northern Ireland was coming apart.

“The benighted Troubles had begun. Even though politics was not on his mind during his formative years, by the early 1970s, as a school principal, Seamus was clearly seen by others as a leadership figure and in 1973 he found himself with no choice but to put his name down on the ballot paper for Armagh District Council. He was duly elected as an SDLP Councillor and thus began a stellar 32-year career in representative politics.”

Mr O’Connor cited some key highlights in that career as:

–          The pivotal role he played in the life of the SDLP, and the equally pivotal role it played in his. He quickly rose through the ranks and by 1979 was Deputy Leader, thus beginning the long and tremendously fruitful leadership partnership with John Hume.

–          Seamus Mallon’s stellar almost twenty-year tenure as MP for Newry and Armagh at Westminster which resulted in him, Tim O’Connor said in his view, ranking alongside O’Connell and Parnell as an outstanding orator and parliamentarian;

–          The leadership role Seamus Mallon played during the darkest years of the Troubles as an almost Biblical voice for decency, tolerance and the relentless pursuit of peace and reconciliation. “His revelation in the book that he made a conscious decision to go to every Funeral in his constituency related to the conflict speaks volumes in that regard.”

–          Seamus Mallon’s central role as SDLP Chief Negotiator in the Multy-Party Talks that led to the Good Friday Agreement in 1998, alongside the other leadership figures such as Prime Minister Tony Blair, Taoiseach Bertie Ahern, President Bill Clinton, Senator George Mitchell and many others, a number of them here today.

“Everybody involved agrees that Seamus was a pivotal figure throughout the Talks – a moral voice, a challenging task -master in terms of the key principles that were required as foundation stones, and a particularly central contribution to Justice, Policing and the shape and nature of the Executive and Assembly”;

–          The extraordinary, forensic and leadership work he did on the implementing legislation for the Patten Report which gave us the transformational new beginning for policing in Northern Ireland;

–          His historic tenure as the inaugural Deputy First Minister in the NI Executive established under the Agreement and the leadership he gave alongside David Trimble to the new power-sharing institutions in their formative early years, until his retirement from the post in late 2001.

He paid tribute to Mr Mallon’s steadfastness, his refusal to resort to partisanship, his unfailing belief in partnership, his huge sense of fair play, his warmth and decency as a human being, and of course his fierce and unwavering commitment to non-violence.

“Seamus also believed deeply in, and practised, the power of friendship.  He made friends everywhere and in all quarters. He was loyal to them and they to him. Being inside the circle of Seamus Mallon’s friendship meant being in a very warm place indeed. He was fun, he was so kind. Seamus did friendship extraordinary well.”

“That is the essence of the Mallon Legacy – the commitment to the Shared Home Place, founded on peace, mutual respect and friendship. Our prayer today in this beautiful Church is that the future of our island, North and South, will be defined and shaped by that Legacy.”