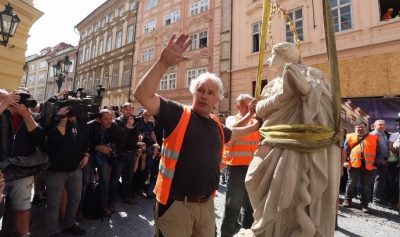 years. Yesterday morning, a replica of a statue destroyed by a Protestant mob in 1918, was placed on top of a Baroque column, also newly restored, in the Old Town Square.

“This is a historic moment, we have regained our place in the spiritual centre of Europe,” said Jan Royt, an art historian and a vice-rector of the Charles University. “With the renewal of this column, we symbolically subscribe to the spiritual values of Europe.”

But the restoration has not been without controversy and there were scuffles among the crowds watching yesterday’s events.

Objectors to the statue include both Protestants and atheists – partly as a result of the Czech Republic’s Communist legacy. The country has the second largest proportion of non-believers in the world, after North Korea.

Nevertheless, the vast majority of those present were members of the Catholic faithful who have long been campaigning for the restoration of the Marian icon. The monument will be fully re-inaugurated on the Feast of the Annunciation, when it will be blessed by Cardinal Dominik Duka, Archbishop of Prague. Between now and Saturday 15 August, statues of four angels will be added to the monument, as well as an image of Our Lady of Rynecká.

The 15m high monument was first erected in the seventeenth century, when Prague was part of the Austro-Hungarian empire. The city petitioned the Holy Roman Emperor, Ferdinand III, for permission to give thanks to Our Lady, and the Swedish army, for ending the Siege of Prague. This was the last conflict in a 30-year war that ravaged central Europe. That conflict was brought to an end by the Peace of Westphalia in 1648, which also brought to an end the Eighty Year War between the Netherlands and Spain.

However, because of the statue’s associations with the Habsburg dynasty, some Czechs saw it as a symbol of Catholic ascendency in Bohemia. In 1918, when the new state of Czechoslovakia was created from what was part of Hungary, the Czech nationalist writer Franta Sauer led a mob that toppled the column. It is said that on his death bed, he confessed to regretting his action.

The campaign to restore the statue has been running for over two decades and approval for the restoration was only granted by the Prague Assembly in January this year, with 34 out of 65 deputies voting in favour of reinstating the monument.

On the Archdiocese of Prague website yesterday, Jan Royt said that the pillar is by no means “a dead piece of stone”, but rather an expression of a living reverence for the Virgin Mary. “It cannot be devalued on any symbol of Habsburg rule over this country,” he said. “It is a symbol of still living faith.”

There have been links between Ireland and Prague for many centuries – following the Flight of the Earls in 1607, many Irish settled in the city. In the seventeenth century, Irish Franciscan monks fleeing religious persecution at home set up a friary here in a street still known as Hybernská ulice, or “Irish Street”.