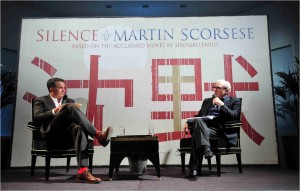 Catholic film director Martin Scorsese is due to begin production next month on the epic story of the Jesuit missionaries who went to Japan in the 17th century.

Andrew Garfield will play the younger Father Rodriguez, who travels to Japan in search of his spiritual mentor, following reports that he has apostasised.

In 1549, when St Francis Xavier and two companions first set foot in Japan, the nation was Buddhist and Shinto; yet they were permitted to preach and teach, and the Jesuit and Franciscan missionaries converted half a million people with the message of the Gospel.

Christian churches were visible throughout the land which had once held only Buddhist temples.

Large numbers of laypeople joined their effort as catechists, and a local seminary was established to prepare native-born Christian men for the priesthood.

But in the 17th century, the Tokugawa dynasty reversed the policy of tolerance, and Christianity was banned.

Among those executed for their faith were St Paul Miki and Companions – 26 martyrs who were tortured in Nagasaki in 1597 and then crucified on a hill overlooking the city.

‘Silence’ is expected to be released around the end of 2015.

Martin Scorsese was born into a devout Italian family and as a young man seriously considered the priesthood, even entering the seminary.

However, he drifted away from the faith and later married five times. Recently he described himself as “a lapsed Catholic” but added, “I am Roman Catholic, there’s no way out of it.”

In the July edition of Harper’s Magazine, Vince Passaro writes about how Scorsese’s Catholic upbringing lies at the heart of many of the stories he tells on film.

In interviews, Scorsese has admitted that one of his great themes is betrayal — and Passaro notes that in each movie, Scorsese’s turncoat ends up alone, isolated from society, a Judas who pays a heavy price.

More than that, Passaro writes, Scorsese’s tragic figures demonstrate “what becomes of men who are separated from God, men who are lost.”

The great tragic flaw of Scorsese’s characters is the belief they can get by without God, and without moral choices: the violent boxer in ‘Raging Bull’, the crazed vigilante of ‘Taxi Driver’, even the soaringly wealthy and successful Howard Hughes in ‘The Aviator’.