Students and staff, past and present, gathered to bid a fond farewell to what has been affectionately named ‘The Mount’ after nearby Mount St Vincent Convent in Limerick.

“The day was a very emotional day for many. The huge turnout was extremely gratifying and everyone was so positive, delighted to be there and many acquaintances were renewed and memories shared,” Ann O’Reilly, Acting Principal, Scoil Carmel, told CatholicIreland.net.

“The formal liturgy was so moving and symbolic, while the reception back at the school gave people the chance to interact in a more informal way.” 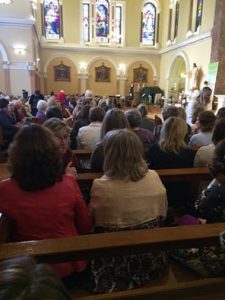 The Church, with a capacity of over 400, was packed with many standing.

Mercy sisters from Mount St Vincent and Westbourne convents were present as was the Provincial Team from Naas.

There were several previous principals and deputy principals, past staff and pupils and parents some who attended on behalf of their daughters’ who are living abroad. The liturgy was held in St Joseph’s Church.

“Sunday was a beautiful closing ceremony and very apt considering we had every major occasion of school lives, from joining to graduation, in St Joseph’s Church. The singing was lovely and the hymns so familiar, that we were transported back 30 years or more singing ‘As I kneel before you’ and ‘Ave Maria’,” Margaret, Ann and Mary Foley who are sisters and their cousin Mary McAleer (nee Foley) told CatholicIreland.net. 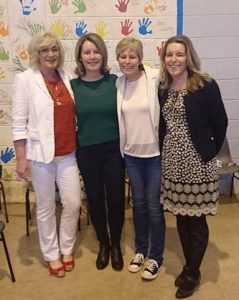 Foley family members who were pupils at Scoil Carmel

It cited “insurmountable” challenges including demographic changes and the economic downturn for the closure.

At the time there were 300 students and 30 staff including teachers, administration and caretakers.

The Catholic secondary school is under the trusteeship of CEIST which has other schools in the city including Ardscoil Mhuire in Corbally and Presentation Secondary School in Sexton Street.

The long lead up to the closure facilitated the current pupils in completing Junior and Leaving Certificate examinations at Scoil Carmel.

The teaching staff who catered for the needs of Scoil Carmel during the transition period, will be re-deployed with the help of the Department of Education.

“Scoil Carmel is still a functioning school with all our students facing state examinations in June so it is a difficult time for current staff and pupils but we all worked really hard to make this day a success and we were delighted that it was such a success. The affection and support shown by past members of the community is a great support,” said Ann O’Reilly. “I really believe that the day was a true celebration of the legacy of 60 years of Scoil Carmel.”

The theme for the day was based on the school motto Scaipimis an Solas -Let us spread the light.

Scoil Carmel began life as a” secondary top” run by the Sisters of Mercy who understood the importance of education for girls in Limerick.

Recognised by the state as a secondary school in 1952, it has since become an important part of the educational fabric of Limerick city with the trademark bottle green uniform.  Students come from all parts of Limerick – county as well as city.

Over 700 students attended the school at its peak and it embraced new developments in education and curriculum initiatives offering Transition Year, Leaving Certificate Applied as well as the traditional Leaving Certificate. Subjects including honours maths and various science and business subjects were available to the students.

Many present on the day were happy hear recollections of past teachers and principals including English teacher, Mr O’Mahony, who spoke of the row of horse chestnut trees on the school boundary and the many day dreams it was the background to.