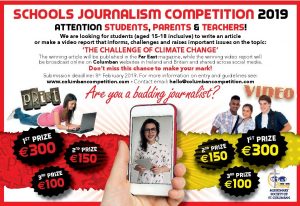 Following the success of last year’s inaugural Columban Schools Journalism Competition, the Far East magazine has announced that it will once again run the competition in 2019.

Students aged 15 to 18 (inclusive) are being invited to write an article or make a video report on the topic: ‘The Challenge of Climate Change’.

Two separate competitions will be held, one for students in Ireland and one in Britain (England, Scotland and Wales); each has two categories, writing and video.

The objective of the competition is to encourage students to use their journalistic writing and mobile skills to look at a topical issue that is relevant to society today and resonates with Catholic Social Teaching.

Columban Missionaries believe the crisis of human-induced climate change, which threatens all life on Earth, is a key moral issue for the churches.

Columban Fr Cyril Lovett, the retired editor of the Far East magazine, told CatholicIreland.net, “In our own day it is very clear that good journalism really does matter. Social media, which brings so many blessings, has also opened the doors to so-called ‘fake news’, to widespread anonymous comment, and to a scarcity of news stories that have been thoroughly researched and vouched for.”

In the Columban centenary year, he said, the magazine hoped the competition would encourage idealistic young people to consider a career in journalism.

“Those who want to be journalists must write and they must find outlets who will accept and publish their writing,” he explained.

Last year, students were challenged to write an article or make a video report on the theme ‘Migrants are Our Neighbours’. In 2019 the topic is ‘The Challenge of Climate Change’.

“We are not looking for pieces that have been cobbled together from downloads of endless internet statistics. Rather we gave last year’s prizes to students who could tell their own stories or write an interesting piece on migrants known to them from their own town or area,” Fr Lovett said.

“This year, we will be watching for those who can reduce the worldwide challenge of climate change to the particular situations of Britain or Ireland and to creative local efforts to take the first steps to meet that challenge.

“We know that the response to the huge international challenge of climate change has already begun with a multitude of first steps. We want to hear the students write about such local efforts, and about the personalities of the leaders involved,” he said.

In Ireland, entries will be judged by:

Closing date for entries is 8 February 2019. The winning articles and videos will be announced in Columban media on 15 March 2019.

Columban Fr Seán McDonagh is known around the world as an eco-theologian who works to raise awareness on the connections between justice and peace issues, environmental sustainability and faith.

He is an outspoken critic of policies that allow for the systematic degradation of the environment, linking them to global poverty and the increased suffering of the poor.

He is the author of numerous articles and nine books including Climate Change: The Challenge to All of Us, Greening the Christian Millennium, Care for the Earth and Dying for Water.

For more information about the schools journalism competition: www.columbancompetition.com