Home > Featured > School costs too much for parents – Barnardos

School costs too much for parents – Barnardos 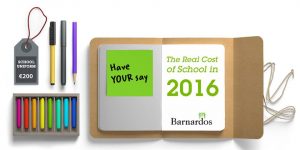 One in ten parents get into debt to send their children to school.

Some even borrow from money lenders while others postpone paying vital household bills such as rent and electricity so they can pay the costs of the Irish free education system.

“I am genuinely sick worrying how I am going to pay for back to school costs this year. All of our household bills are increasing, the only thing left to cut back on is food….We do try and save but it’s just impossible in this society,” said one parent.

This is just one of the 1,400 parents who completed the Barnardos School Costs Survey 2016.

Another said that their two secondary school children needed electronic tablets and e-books (€850 for each child), transition year costs of €450 for another and school bus costs €650 – a total of €2,500.

The third child in primary school had costs for uniforms, voluntary contribution, sundries coming to €1,500 bringing the total for three children in school to €4,000.

“We always imagine it’s the children dreading back to school time the most, but year after year it’s clear to Barnardos that parents are the ones suffering,” said Fergus Finlay, CEO, Barnardos.

He added that while some benefit from school book rental schemes, minimal contributions and plain uniforms too many face: “astronomical costs for fully crested uniforms, lengthy book lists and a huge lists of ‘extras’ including payments for stationery, arts materials, photocopying and school tours.”

The Barnardos survey highlighted unfair differences in costs from school to school and how the so-called ‘voluntary contributions’ are not always voluntary.

June Tinsley, Head of Advocacy, Barnardos told Catholicireland.net that some schools do not ask for a voluntary contribution, some ask for undisclosed contribution but some “actively pursue” parents for non payment.

“They pursue them in different ways – through text or letter or some deny the child a school locker until the amount is paid,” she said.

It is similar for books and other expenses.

“Some schools can be very, very, strict, if a child hasn’t paid their portion of the school book rental for example they will not get access to all the books until that is fully paid,” June Tinsley said.

Barnardos has come across many children who know there is no money to pay for school and do not want to be the cause of added pressure on their parents. Some children have offered to drop out of school to save their parents the expense.

“The cost of going back to school is a significant barrier to participation in the school system for low income families,” June Tinsley warned. 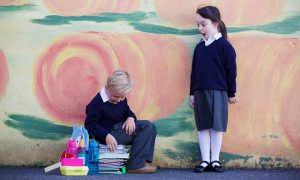 Barnardos stated that it is not fair to expect schools to shoulder the burden either.

They have faced cut after cut in recent years and many are struggling to make ends meet.

The government has the power, the means and the opportunity in Budget 2017 to reduce the burden on parents.

“For just €103 million it could provide all primary school books, remove the voluntary contribution, eliminate classroom resources fees, restore the capitation rates back to 2010 levels and provide free transport for those using the School Transport Scheme.”

“This minimal investment would ensure a level playing field for all primary school pupils and substantially reduce the financial burden on parents,” said Fergus Finlay.

He added that in the first Budget of the new Government, there is an opportunity to show real commitment to making Ireland fairer for all children.

“The Government has already pledged to increase education spending by €500 million by 2021. Barnardos wants to see this spent efficiently and effectively to reduce the burden on parents. It is the Government’s responsibility to adequately fund education – not parents,” he said.

The key findings in the survey show it cost between €340 (senior infants) and €395 (4th class) to send a child to primary school.