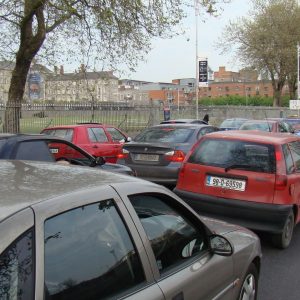 World Meeting of Families 2018 organisers have delayed issuing tickets for the Papal Mass in the Phoenix Park on Sunday 28 August because too many attendees have indicated that they are travelling to the event by car.

“We had planned to email all tickets by 31 July but we were unable to do so due to the large number of people who have indicated to us that they intend to travel to the event by car,” said an email issued to those who had applied for tickets.

WMOF2018 organisers stated bluntly: “The available infrastructure in Dublin cannot cater for all those who have indicated that they are coming by car.

“We have delayed the issue of tickets to 10 August so as we can finalise the colour coded routes based on the information we have received about where those attending are coming from.”

Certainly, the number of Irish people using private cars as their preferred method of transport has increased enormously over the decades. In 1979 when John Paul II celebrated Mass in the Phoenix Park, there were about 600,000 private cars registered in the Republic of Ireland; today there are well over three times that number: more than two million privately owned cars. In the last ten years alone, the number of privately owned cars on Irish roads increased by half a million. With high levels of car ownership and usage, Dublin is reckoned to be one of Europe’s most congested cities.

It is possible that the WMOF organisers have been confused by the replies given by ticket applicants when they were asked how they were travelling to the papal event in Dublin. Thousands of Mass-goers who were planning to travel to the outskirts of Dublin by private car, and then on to the Phoenix Park by public transport, will have indicated that they were travelling to Dublin for the event by car, when in fact they weren’t intending to drive next or near the Phoenix Park or Dublin city centre, where access to traffic will be greatly restricted on the day.

Many who received last week’s notification from the WMOF about the delay in issuing tickets will have been confused by the contents of the email. It purportedly provided a link that allowed Mass-goers to book public transport, put when recipients clicked on that link, they received a message saying ‘Thank you. You have been successfully removed from this subscriber list. You will no longer hear from us’.

There was an option below that message to re-subscribe to WMOF emails, but those who didn’t re-subscribe may not have got a subsequent email containing the correct link to public transport information.

Dublin Bus, DART and LUAS transport will all be free of charge on Sunday 28 August to all those holding tickets for the Papal Mass. However, contrary to the original WMOF2018 email, you cannot book places on Dublin Bus, DART and LUAS services. Seating and standing room will be available on a first-come, first-served basis, but city centre services shall be especially frequent.

For those travelling some distance to the Dublin event, it is worth checking if there are coach services being organised by your parish. Or better still, you might volunteer to help organise a coach service for your fellow parishioners.