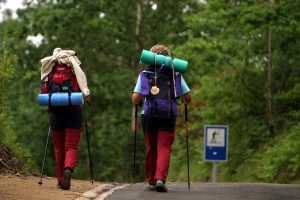 Two pilgrims on the Way of St James to Santiago. Note the scallop shell, the traditional sign of the pilgrimage. (Photo: Santiago Tourism)

The medieval poet Geoffrey Chaucer famously claimed that it was from April onwards that folk “longen to go on pilgrimages”.

But in this day and age, people start thinking about making spiritual journeys much earlier in the year, with the result that the Camino de Santiago information centre in Dublin opens next Saturday, 2nd March, for the 2019 pilgrimage season.

However, because of restoration work to its interior, this year Santiago Cathedral is closed, and pilgrims will only have access to the cathedral’s crypt and to the statue of St James. The Botafumeiro, the enormous thurible used to dispense clouds of incense within the cathedral, will not be in operation.

Nevertheless, the Camino Society of Ireland, which is based at St James’s Church in Dublin, is expecting large numbers of Irish pilgrims to make their way to the shrine in northern Spain.

Last year 7,548 people from Ireland completed the pilgrimage; and in 2018 the Irish comprised the seventh-largest foreign nationality making the journey.

To receive the official certificate of pilgrimage completion known as a credencial, you must walk the last 100km of your journey on foot or travel on horseback or you can opt to cycle, in which case you must travel at least 200km by bike. The vast majority (93 per cent) complete the pilgrimage on foot, 6 per cent complete it by bike and less than 1 per cent complete it on horseback, by sail or in a wheelchair.

Dating back to the ninth century, when the remains of St James were said to be interred in the Galician cathedral, the pilgrimage to Santiago predates Chaucer’s pilgrimage to Canterbury Cathedral by more than 250 years. There is a network of routes across Europe to the shrine, and within Spain the Camino Francés (the French Way) is listed in the UNESCO World Heritage List.

Such is the worldwide fame of the Spanish pilgrimage. that foreign pilgrims now outnumber Spanish ones. Of the 327,374 people who received a credencial in 2019, 183,237 were foreigners.

The largest non-Spanish group to make the journey are Italians, followed by Germans, Americans, Portuguese, French, British and Irish. Interestingly, the next biggest national group is Koreans, who made up more than 3 per cent of all foreign pilgrims to Santiago last year.

Already this year, the Camino de Santiago was completed by 1,737 pilgrims in the month of January.

After next weekend, the Camino information centre at St James’s Church, Dublin 8, will be open from 10.30am to 3.30pm, Thursday to Saturday, until the pilgrimage season finishes in October.

At the information centre you can obtain the Pilgrim’s Passport, which allows you to stay at official hostels along the pilgrimage route, and which you use to record your journey on foot or on horseback so you can obtain your official credencial at journey’s end in Santiago.