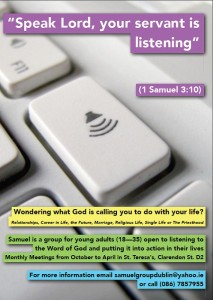 Four people have already signed up for Samuel groups as a promotional campaign gets underway to encourage young people to join a group in Cork.

This is the second year for Samuel and some young participants spoke so enthusiastically about it that their friends wanted to do it this year.

“We are doing a Facebook promotion campaign and posters are being sent to all the parishes, then we are linking in with the various youth groups,” said Alan Neville, director of Vocations Missionaries of the Sacred Heart (MSC).

The Samuel meetings will be held in his Western Road parish.

“We already have four people who got in touch with us off the back of last year’s Samuel meetings,” he explained.

“Friends who did it last year and got on very well, if they liked it enough to recommend it to their friends – that is the real proof,” he told CatholicIreland.net.

Samuel Groups are for single young adults between the ages of 18 and 35 who are wondering what God is calling them to do with their lives.

The aim is to help participants discern their direction in life, whether this is to marriage or dedicated single life, to priesthood or religious life.

It would also suit those who are making decisions about their career, life choices, or about moving abroad. 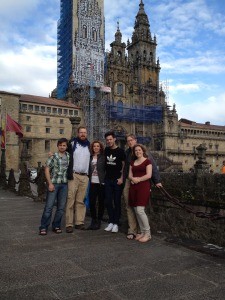 Some of last year’s Samuel group

“The group was really supportive and easy going,” one of last year’s participants said.

“I loved being able to look at the big questions in life with others who were thinking about the same things,” said another.

They enjoyed the sense of community, the prayer life, and the food, said Fr Neville and some of them have progressed to further discernment, but the Samuel Group is open to all.

“The whole thing is done very informally. We start with food, with dinner not tea and biscuits, but a proper sit down meal with dessert. And that really helps because a lot of the most interesting things happen over the table,” he said.

“It’s not that we are sitting in a classroom, when you are breaking bread that is when some really interesting conversations get going.”

After the meal there is a short input for 10 or 15 minutes and then the Lectio Divina or meditative prayer based on a Bible reading for around 45 minutes. There will be 8-10 people in this year’s group.

“One of the beauty of the groups is they do it once. Some people do not want a long term commitment and these are for six meetings – one each month. Along with that they go for spiritual direction once a month which we arrange for them, and at the end it is about helping them to move a step further along,” he said.

As well as this second Samuel group in Cork, it is hoped that there will be another group started in Dublin.

“We do it with Vocations Ireland although it is not specifically about vocations to the priesthood or religious life. It is for those who are discerning their vocation in a broader sense,” said Fr Alan Neville.

He said that those who feel they want to go further can go on to an Explore Away programme and after that perhaps on further discernment with a diocese or religious community.