Mountain rescue teams in Mayo are bracing themselves for their busiest weekend of the year, the

weekend of Reek Sunday, when some 25,000 souls are expected to climb to the summit of Croagh Patrick, Ireland’s holiest mountain.

This year’s pilgrimage is again being led by the 73-year-old Archbishop of Tuam, Dr Michael Neary, who will not be the youngest to make it to the top of the 764-m-high mountain.

While some pilgrims insist on making the journey barefoot, Dr Neary follows the counsel of mountaineering experts and wears a strong pair of boots while making his ascent and descent.  Indeed, many reckon that the scree-covered slopes are more dangerous for those coming down the mountain than they are for those coming up.

Mayo Mountain Rescue’s numbers are being bolstered by mountain rescue personnel from across Ireland and the UK and assistance is also provided by a wide range of public bodies including Mayo County Council, An Garda Siochána, the Air Corps, the Civil Defence and the Coast Guard, as well as local landowners and individual volunteers.

Mayo Mountain Rescue advised pilgrims: “Make safety a priority. We recommend the use of proper walking boots, waterproof clothing, food and water and to be mindful of fitness levels and ability of young children. The weather is very changeable and temperatures can vary by as much as 7 degrees between sea level and the summit.”

This advice has been echoed by the Tuam Archdiocese, which said: “Croagh Patrick is a physically demanding mountain. Pilgrims should bring with them a set of warm, waterproof clothing, water and a walking stick or staff.”

The Reek Sunday observances begin on Saturday, with an Eve of Pilgrimage Mass celebrated at 6.30 p.m. in St Mary’s Church on the South Mall in Westport. This Mass will be celebrated by Dr Neary as, by tradition, the Archbishop of Tuam is also the parish priest of Westport. 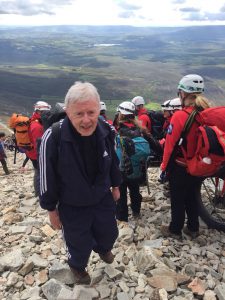 On Reek Sunday itself, Mass will be celebrated on the summit on the hour from 8 a.m. to 2 p.m.

A team of priests are making themselves available from 7.30 a.m. to 2 p.m. to hear confessions on the summit.

The provision of the Sacrament of Reconciliation and the Celebration of the Eucharist on the mountain during Reek Sunday is important devotionally, as those who complete the pilgrimage to obtain a plenary indulgence need to obtain both sacraments within 48 hours of making their way to the mountain top.

For those who would like to add to the physical exertions of the Reek Sunday pilgrimage, or oilithreacht, a group of walkers will leave Ballintubber Abbey at 8.30 a.m. to walk along the 22-km-long Tóchar Pádraig pilgrim way to the foot of Croagh Patrick before beginning their ascent to the place where St Patrick is said to have fasted for 40 days and 40 nights nearly 1500 years ago.

Indeed, this stunning mountain was a place of pilgrimage long before St Patrick visited the site in AD 441. The Tuam Archdiocese notes that in pre-Christian times it was a place where the pagan god Lugh was worshipped. This Celtic god gives his name to Lughnasa/Lúnasa, the Irish for the month of August. The term Reek Sunday comes from the Irish name for the pilgrimage, Domhnach na Cruaiche.

The weather forecast for Westport on Sunday is cloudy with air temperatures of 16°C maximum, but bear in mind that it will be colder on the mountain top, especially if it is enveloped in cloud. Safe climbing!