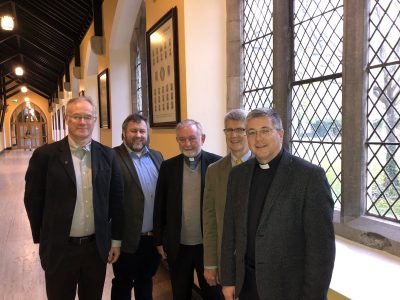 A professor of ecclesiastical history at St Patrick’s College, Maynooth has said safeguarding should permeate every aspect of priestly training from the very start of a seminarian’s studies.

Writing in the Irish Independent on Wednesday, Professor Salvador Ryan said safeguarding and the legacy of child sexual abuse in the Church are such important issues they should not be “relegated to one-off workshops”.

In addition to permeating every aspect of training he suggested that these issues should be discussed regularly in lectures, homilies and retreats.

Professor Ryan has co-edited a new book ‘Models of Priestly Formation: Assessing the Past, Reflecting on the Present, and Imagining the Future’ with two other Maynooth academics, Professor Declan Marmion and Professor Michael Mullaney.

It was launched on Tuesday evening in Maynooth by Archbishop Kieran O’Reilly ahead of a lecture by Fordham academic, Professor Bradford Hinze.

In the book, some of the world’s leading experts consider priestly formation since Vatican II, explore current best practices internationally, and imagine what the future of such formation might look like.

In his article in the Irish Independent, Professor Ryan acknowledged that there is a robust questioning of the model of seminary formation which “traditionally plucked men from their native place and trained them at a remove from their own people – to whom they would eventually return, but as a figure ‘set apart’.”

He said the transition from communal seminary life to parish ministry, in which priests increasingly live alone, continues to be a challenge for the newly ordained.

He suggested that the amount of time seminarians are given for periods of exposure to the realities of parish life during their training needs to be expanded.

“Seminarians need to become used to a model of collaborative ministry, at ease with working in close partnership with lay women and men in parishes from the outset to avoid what the American writer Donald Cozzens has called ‘the cancer of clericalism’,” he wrote.

Professor Ryan highlighted that a number of models of seminary training are already in operation internationally, ranging from the traditional live-in seminary to parish-based communities of seminarians who study in university settings, to a blend of both.

Elsewhere in his article, Professor Ryan noted that seminaries were a creation of the 16th century Council of Trent and that before this model of formation, many candidates were simply apprenticed to a local priest whose education left him just about able to stumble his way through the words of the Latin Mass.

“Seminaries professionalised the priesthood, providing training in ministerial practice, some basic theology and a formation in spirituality.”

But regularised training wasn’t always universally applied. Seminaries didn’t follow a fixed programme, there was no standard length of study and, attendance at a seminary wasn’t actually made a requirement for ordination to the priesthood until as late as 1917.

“What’s more, complaints about seminarians have remained a constant theme for some 400 years,” he stated.

“In 1950s Ireland, with its seminaries filled to bursting point, it might have seemed the seminary, as an institution, had existed in just this way from time immemorial. In reality, nothing could be further from the truth.”

‘Models of Priestly Formation: Assessing the Past, Reflecting on the Present, and Imagining the Future’ is published by Liturgical Press. See https://litpress.org/Products/6412