Home > Featured > Sadness at the passing of Jack Charlton

Sadness at the passing of Jack Charlton

There was a great deal of sadness and affection expressed in many quarters yesterday at the news of the death of former Republic of Ireland soccer manager Jack Charlton, aged 85. 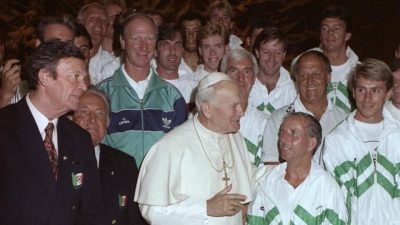 On hearing of the passing of the former Leeds United defender, the Archdiocese of Dublin posted a photo of ‘Big Jack’ and members of the Irish soccer squad meeting Saint Pope John Paul II in Rome during Italia ’90. With the photo, the diocese wrote: “Thanks for all the happy days Jack Charlton. Rest In Peace.”

For nearly ten years, Charlton was manager of the Irish squad and under his leadership it had its most successful period in international competition, with never-to-be-forgotten memories for Irish football fans, including: a 1-0 victory over England in the European Football Championship in 1988, beating Romania on penalties to reach the quarter-finals of the World Cup in 1990 and a 1-0 victory over eventual World Cup finalists Italy at USA ’94.

The Football Association of Ireland said the organisation was deeply saddened to hear of Charlton’s passing and described him as ‘the manager who changed Irish football forever’.

That private papal audience during Italia ’90 was arranged by Monsignor Liam Boyle and took place the day before their quarter final match against Romania.

The Irish squad wore track suits during their meeting with His Holiness because, according to Ray Houghton, the team did not have suits. During the meeting Pope John Paul II joked that the Ireland were his team in the competition.

According to Houghton, in an interview with FourFourTwo.com, it was normal practice for the Catholic members of the Irish squad to have a private Mass while away on tournament competitions. Although Big Jack wasn’t a Catholic, he was as excited as the rest of the Irish squad to meet the Pope, said the striker.

Paul McGrath, the former Irish centre back, described Charlton as ‘a father figure’.

According to football legend, it was Jack and Bobby’s mother, Cissie Charlton, who taught them their footballing skills. In the 1950s, when Bobby was playing with Manchester United, Cissie once asked United’s manager Matt Busby if Bobby was not being picked for the first team there because he was not a Catholic. Sir Matt quickly assured her that was not the case.

Jack will be forever associated with Leeds United, where he played from 1950 to 1973. In all, he made 762 competitive appearances, which is a club record unlikely to be broken. At Leeds, he helped the club win the Second Division title (1963-64), the First Division title (1968-69), the FA Cup (1972) and the League Cup (1968). Both Bobby and Jack were members of the 1968 World Cup winning team, with Jack representing his country at football’s highest level at the age of 30.

Earlier this year, when Jack was celebrating his 85th birthday, Uachtarán na hÉireann, Michael D. Higgins, sent him a congratulatory message, where he wrote: “As a lover of the beautiful game, may I join with so many others in adding my appreciation to you for your achievements during your long career.