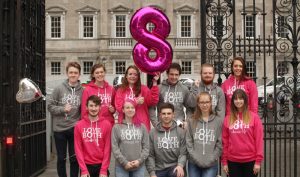 Pro life campaigners have greeted the deletion of the Eighth Amendment from the Constitution with dismay.

On Tuesday, the Amendment was repealed after President Michael D. Higgins signed the Thirty-Sixth Amendment of the Constitution Bill 2018.

The Bill gives effect in law to the result of May’s abortion referendum. There is no longer a constitutional ban on abortion and the Oireachtas will now proceed to legislate for abortion up to 12 weeks.

However, until such legislation is passed, the existing laws will remain in place.

The Taoiseach, Leo Varadkar, told the Dáil on Tuesday that legislation for abortion would be introduced in the first week in October and abortion services would be in place by the new year.

Responding to news of the deletion of Article 40.3.3, Director of the Iona Institute, David Quinn, tweeted, “A gigantic step back for human rights in Ireland. An entire category of human beings cast outside the constitutional protective net you and I enjoy.”

Meanwhile, the Pro Life Campaign (PLC) said it was a “sad day for human rights”.

Spokesperson for PLC, Dr Ruth Cullen said in a statement, “Today is a day to remember all the lives saved by the Eighth Amendment and all the people who are alive today because of it. But it’s also a sad day for human rights as a vital life-saving human rights provision of the Constitution has been removed.

“What will come in its place, wide-ranging abortion, is far from progressive and compassionate as those who campaigned for repeal claim it will be.”

She also expressed confidence that a day will come “when people reflect on what has happened and regret the fact that we as a society have opened the door to the greatest injustice and discrimination of our time, namely legalised abortion, which targets and ends the lives of innocent and defenceless unborn babies.”

The Eighth Amendment or Article 40.3.3 of the Constitution recognised the equal right to life of the mother and the unborn child. It was approved by referendum on 7 September 1983 by 67 per cent. On 25 May, a majority – 66.4 per cent – of the electorate voted to repeal it.