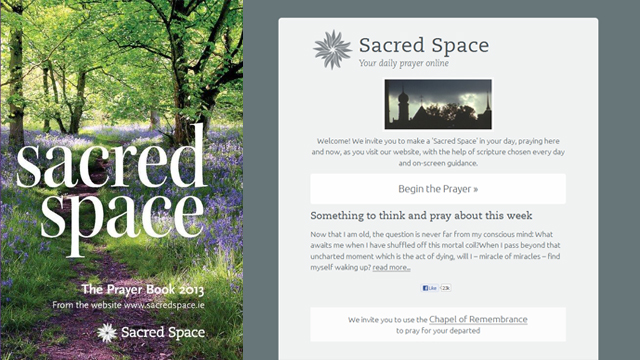 Sacred Space, one of the world’s leading interactive websites for guided prayer, is now available to people in the Peoples Republic of China (PRC).

It was previously only available in Chinese characters not used in the PRC and blocked for access to visitors from the PRC.

Launched on 1 April and facilitated by ucanews.com, Sacred Space is now accessible as a Chinese version in the commonly used script across the country – the simplified characters introduced by Mao Zedong.

“Tens of thousands access the site in 20 languages and it seemed to me a real waste to have this great aid to deepening our engagement with God not available to the growing number of Christians in the PRC.

“Two problems prevented access: the content was not in the script used in China and China’s Great Fire Wall meant that even the content in traditional characters was blocked because it was available only on a site with a URL in Taiwan.”

“The Chinese cyber police blocked it. These were easily solved – by having the traditional characters changed to simplified characters through widely available technology; and by having the content hosted on a URL that won’t upset the Chinese authorities.”

“What we now have is the prayer content available in a script used in China and available on a URL that isn’t blocked,” Fr Kelly added.

More than half a million visitors a month are led through the Ignatian Examination of Conscience (Examen) with almost 20,000 visitors following the prayerful process on weekdays.

The simplified character site joins two other Asian language versions – Korean and Bahasa Indonesia. The service is available in a total of 20 languages.

The new site at draws on the work done by Irish writers and Chinese translators, most of whom are lay people.

A visitor to the site is led on a journey through five pages. First the visitor is invited to slow down and experience the calm of contemplative stillness.

Next the visitor is invited to examine the people and events of the day and see how they have brought him or her to peace and composure, or confusion and disturbance.

These ‘moods’ are then viewed in the light of a passage from the Gospel drawn from each day’s Mass. The session ends with a prayerful expression of gratitude for God’s healing.