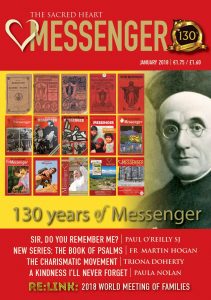 A series of events have been organised around the country to mark the 130th anniversary of the Sacred Heart Messenger.

The magazine began back in January 1888 under Fr James Cullen, who later founded the Pioneers. According to the current editor of the Messenger, Fr Donal Neary SJ, Fr Cullen went to the rector in Belvedere about the possibility of starting the magazine. “He got a pound and a room – and the rest is history!”

Sales of the Messenger today stand at 52,000, and it remains one of the best-selling magazines in the country. Letters of petition, thanksgiving and subscriptions, flood into the Messenger office on Dublin’s Leeson Street at the rate of over 100 per day.

In an interview with Pat Coyle of the Jesuit Communications Office, Fr Neary relates some of the magazine’s history, including the unique way it was delivered to every part of the country through a network of ‘promoters’. “Due to the incredible work of our many promoters around Ireland, The Messenger has stayed consistently at the top-end of magazines in Ireland – we sell over 52,000 print copies per month and it is read by twice that number,” Fr Neary explained.

Of the 52,000 copies it sells every month currently, approximately 35,000 are distributed by 2,000 promoters in parishes and localities across the country. Fr Neary’s own mother used to promote 100 copies a month for 50 years.

“When we began it in 1888, it had been printed and published by the British Jesuits for about 30 years before that. It was to spread devotion to the Sacred Heart, which was a big work of the Church all over the world. Later it was the official publication of the Apostleship of Prayer to pray for the Pope’s Intentions every month. It is still that. Devotion to the Sacred Heart is a bit different now and we take it as spreading devotion to the love of God and the heart of Christ.”

Asked what the magazine content would have looked like 130 years ago, Fr Neary, who served for 12 years as parish priest at Gardiner Street Church in Dublin said, “There would have been a lot of prayers of petition and thanksgiving and longer articles than we would have now, in very small print. I honestly don’t know how anybody read it in those days! There were great articles for women and the home. Remember it was only a penny, so the poorer people in Ireland learnt how to get the best out of their hens, iron a blouse and pray for the Pope’s intentions – all for a penny.”

A penny would have been the price of a stamp. Fr Cullen’s aim was to keep the price at the cost of a stamp. Today, however, each issue costs €1.75.

In his interview with Pat Coyle, he recalled how he worked in the Messenger office in 1968 for a year before he was ordained. “That was the year when we went from the old cover which was just the Sacred Heart in black and white to a non-sacred heart picture – and the amount of soul-searching to do that!”

“It has been a very traditional magazine; the cover now is full of colour and it is not religious at all. For example, the February issue features surfer John McCarthy, who speaks to the magazine about his faith.

“We have a series of writers lay and Jesuit, some of whom are well known. It is a magazine of the Jesuits, it is not a Jesuit magazine in the sense that we don’t do a lot of Jesuit news in it, but a lot of our best-known Jesuits write in it, like Fr Gerry O’Hanlon, Fr Brian Lennon Fr Brian Grogan, Fr Michael Paul Gallagher wrote a lot…”

The thanksgiving letters are still popular. According to Fr Neary, if you look back over 100 years ago, the letters of petition and thanksgiving show what people’s preoccupations were, mainly World War I and the safety of family members.

“By looking over the thanksgiving letters for a certain amount of time, you get a good history of Ireland and what was really on ordinary people’s minds.” Today’s petitions tend to be financial and according to Fr Neary, there are a lot about mortgages.

The Messenger team have organised a series of events around the country to mark the 130th anniversary of the magazine.

On 15 April there will be a special Mass in Portadown followed by one in Portlaoise on 29 April. Gardiner St Church will also host a celebratory Mass in September. The annual Messenger Day of talks, prayer and retreat will take place in Gonzaga College in Milltown Park on the 23 June.

Fr Neary has said all are welcome to join them at all and any of these events for this special birthday.