Home > Featured > Sacraments are not conveyor belts but moments of faith

Sacraments are not conveyor belts but moments of faith 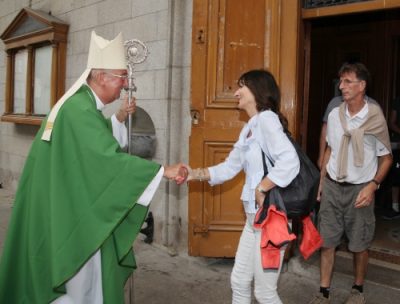 The Archdiocese of Dublin is seeking the views of the faithful on how to improve the preparation and celebration of sacraments, especially Holy Communion and Confirmation.

In a video posted on the diocesan website, Archbishop Diarmuid Martin observed: “Irish culture is changing and we have to see how in the developing Irish religious culture we prepare people for the sacraments, and particularly the sacraments of initiation: baptism, Holy Communion and Confirmation.”

Sacraments are not conveyor belts, he continued. They are not just social occasions, although they are social, but “they are fundamentally moments of faith”.

“We want to see how is the best way in the years to come, to prepare children and families for the celebration of the sacraments.”

Two online surveys have been posted on the website – one aimed at parents and guardians, the other at schools and parish personnel. Respondents have until 25th February 2019 to complete the questionnaires.

In a letter posted on the diocesan website, Archbishop Martin appealed to families and parish and school personnel to engage with the survey to “express your views and to give voice to your reflections”.

He said the review process was important and significant. “If we all play our part, it can have a transforming effect. It can help change the quality of how we accompany young parents and young families. It can help us form tomorrow’s church; a church of faith-filled families who are confident witnesses.”

The survey arises from a growing need to review the preparation for sacraments. “Many people are asking how can these celebrations be joyful encounters with the Risen Christ rather than just ‘rites of passage’? How can they be celebrations of a vibrant faith rather than the ‘conveyor belt’ they are often described?” asked the Archbishop.

In response to these concerns, and following proposals from the Priests Council, the Archbishop set up a review group last autumn, tasked with consulting widely on the subject and making recommendations for the future.

This listening process will be followed by a stage of “prayerful discerning” based on the collated survey responses.

Archbishop Martin concluded his online video message: “I think this is a great opportunity. There’ll be difficulties, but it’s a great opportunity of renewal in the Church and I hope many, many people will join in the consultation so we come up with results that will be owned by people in today’s Church and in tomorrow’s Church.”