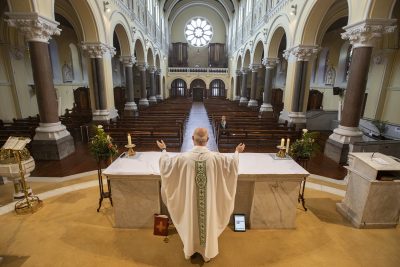 Fr Michael Toomey celebrates Mass on 17 March 2020 at SS Peter and Paul’s church in Clonmel in the presence of the Mayor of Clonmel, Cllr Garret Ahearn. Pic: John D. Kelly.

RTÉ has announced that it will be broadcasting weekly Sunday Masses and Services from this Sunday with the help of Churchservices.tv on RTÉ News Now.

In a statement, Mr Childs said Mass this Sunday will be broadcast from the Holy Family Mission in Glencomeragh, Co Waterford (https://www.holyfamilymission.ie/ ) at 2pm on RTÉ News Now.

It will be celebrated by Fr Patrick Cahill.

The station also broadcasts a weekly Mass in Irish on Raidio na Gaeltachta on Sundays at 11am.

However, the current COVID-19 crisis has left many people feeling the loss of a weekly Sunday Mass or Service in English on RTÉ terrestrial television, Roger Childs said.

As some of these people are unable to connect with their own churches, RTÉ in collaboration with Churchservices.tv will, for the rest of the lockdown, broadcast Sunday Mass on RTÉ News Now when a Protestant service is being broadcast on RTÉ One and RTÉ Radio 1 Extra and vice versa. 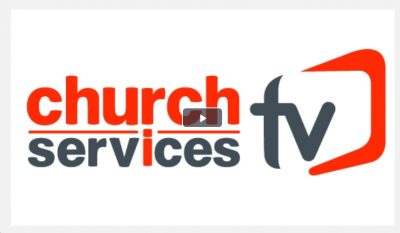 “With the help of Churchservices.tv I hope to maintain this practice while restrictions persist, broadcasting Protestant Services, too, on the weeks when RTÉ One/Radio 1 Extra is featuring a Mass,” Mr Childs explained.

He is particularly anxious that the elderly, housebound, hospitalised, cocooned and imprisoned are made aware of these additional worship broadcasts.

RTÉ News Now can be accessed on Saorview Channel 21; Sky 521; Virgin 200; Eir 517 and also via its own website, free app and via the RTÉ Player, where this content will also be available after the initial transmission.

The figures for the streaming of church services have continued to rise as the lockdown continues.

According to Brenda Drumm of the Catholic Communications office, “parishioners have been flocking online to the various services being provided: morning prayer, evening prayer, daily Mass, holy hours and the full suite of Holy Week and Easter services”.

Writing in the May issue of Intercom magazine, she said “The online statistics have increased to the tune of millions.”

According to Churchservices.tv, since the start of the coronavirus pandemic there has been an enormous increase in daily online viewing of Mass, with figures ranging from 200,000 to 300,000 per day, rising to half a million for weekend Masses.