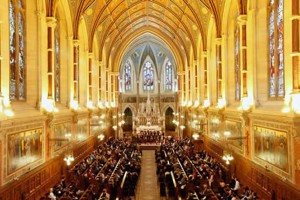 RTÉ has chosen the neo-Gothic chapel of Ireland’s national seminary at Maynooth for its Easter services broadcasts. This will be the first broadcast of Easter services from Saint Patrick’s College Maynooth by RTÉ religious broadcasting. It will include Good Friday and Easter Vigil ceremonies on Friday 19 and Saturday 20 April.

“The atmosphere of the chapel is always spiritual and evocative,” said Father Tomás Surlis, rector, Saint Patrick’s College. “The pitch-dark chapel will be illuminated by hundreds of individual candles held aloft by congregation members, all of them lit from the Paschal Candle which will itself be lit from the Paschal Fire situated outside the College Chapel. It will no doubt be a very special celebration this year.”

The building of Saint Patrick’s College Chapel was finished in 1891. It was designed for sung service and has 454 ornately carved wooden choir stalls.

Included in the services will be three specially commissioned pieces of music by Irish composers. The choir of 30 voices will be directed by Dr John O’Keeffe, director of sacred music at Maynooth. He led all of the choirs during last year’s Papal Mass in the Phoenix Park for the 9th World Meeting of Families.

“All across the country, and, indeed, the world during the Triduum days, there are musicians endeavouring to do justice to the great events that we gather to celebrate. Here in Maynooth, we try to build on the foundations of two major traditions, the rich heritage of chant and choral music that has grown up with the Church’s liturgies down the centuries, and the cultural devotional musical and language aspects of our native tradition,” said Dr John O’Keeffe.

He explained that for this year’s Easter Triduum celebrations, members of the seminary choir will be joined by staff, students and alumni singers from the university.

“It is an honour and a privilege to us to be involved in this year’s broadcast of the Easter celebrations in our College Chapel,” he said.

Kairos Communications, which is based in Maynooth, will produce and broadcast the two ceremonies for RTÉ. They can be viewed throughout Ireland on television and also by worldwide audiences via the internet.

The congregation will include local parishioners, family and friends of seminarians, lay students from Saint Patrick’s Pontifical University and Maynooth University, and faculty and staff members from both.

The College community has extended an invitation to others interested in joining the congregation in the Chapel. They are asked to get in touch with the College to secure a seat.

Separately, the Irish Catholic Communications Office has released details of Vatican Television’s worldwide telecasts of the public liturgies to be celebrated by Pope Francis for Holy Week and Easter 2019.

For further details of satellite broadcasts and updates see: www.worldtelecast/Easter2019.