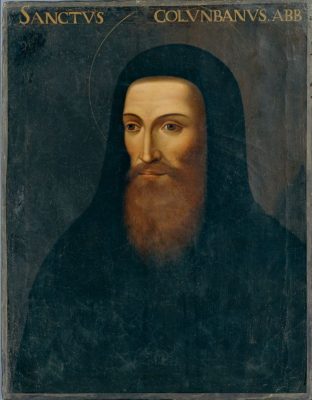 A portrait of St Columbanus by Giuseppe Franchi

The Royal Irish Academy will host a lecture this Thursday about the extraordinary impact that a 14th century Irish monastic saint, Columbanus, had on the shaping of modern Europe.

The lecture, titled “Making Europe: Columbanus, Robert Schuman, and the Idea of Europe” will be given by Dr Alexander O’Hara of the Department of Medieval History at the University of St Andrew. Dr O’Hara will explore how Columbanus proved to be an inspiration to Robert Schuman, the French foreign minister described as the founder of modern Europe. Given Brexit and the imminent departure of the United Kingdom from the EU next year, the lecture is a timely one.

Columbanus, born c.550 on the Carlow/Wexford border, is the best known of the many Irish missionaries who re-evangelised Europe during the Middle Ages after the fall of the Roman Empire. There have been some calls, including from Columban priest Fr Seán McDonagh,  for Columbanus to be named as the patron saint of a united Europe.

The Irish saint, who also happens to be the patron saint of motorcyclists, studied at Cleenish in Co. Fermanagh, before serving in Bangor for most of his life. But relatively late in life, at the age of 51, he and a group of companions set sail for Europe to become pilgrims for Christ. A distinguished teacher of scripture, Columbanus founded monasteries in Annegray, Luxeuil and Fontaines in Burgundy in France, then in Bregenz in Austria and, finally, in Bobbio in Northern Italy, where he died in 615. It is said that Columbanus first articulated the idea of Europe.

In 1950, a group of European statesmen and scholars met at Luxeuil-le-Bains, in eastern France, at the invitation of Schuman, to commemorate 1400 years since Columbanus’s birth. Among those present were then-Taoiseach John A. Costello and Irish Foreign Affairs Minister at the time, Seán McBride, as well as Msgr Angelo Roncalli, a Vatican official who would go on to become Saint Pope John XXIII.

As well as discussing Columbanus, the politicians present in Luxeuil also entered into negotiations that led to the signing of the Paris Treaty in 1951 and the creation of the European Coal and Steel Community, comprising Belgium, France, Italy, Luxembourg, the Netherlands and West Germany. This was to be the forerunner of the European Economic Community, the European Community and the European Unity that exists today.

Dr O’Hara’s lecture is free of charge, but registration is required via the webpage.

The event at the RIA at 19 Dawson Street starts at 6pm on 15th November. Afterwards two books by Dr O’Hara will be launched by Dr Elva Johnston of UCD. These books, published by Oxford University Press, are Columbanus and the Peoples of Post-Roman Europe and Jonas of Bobbio and the Legacy of Columbanus: Sanctity and Community in the Seventh Century.

The lecture is sponsored by the Heritage Council as part of the European Year of Cultural Heritage 2018.