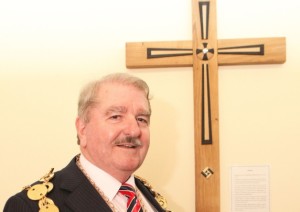 An unholy row has broken out in the chambers of Limerick County Council after the outgoing Fianna Fáil Mayor of Limerick, Cllr Kevin Sheahan, had a crucifix erected in the council chamber.

Mayor Sheehan stepped down as mayor last week but the day prior to his departure he had a crucifix made from bog oak erected in the council chamber.

Some councillors are unhappy with a religious symbol displayed prominently in the council chamber.

Fine Gael Councillor, David Butler, complained that it was “not the most inclusive decision to make”.

He added, “I share the same faith so it would not offend me personally. But we should always try to be inclusive in everything we do.”

Cllr Butler added, “By showing preference to one faith over another, it goes against that principle. Faith is particularly divisive, so when you start choosing particular faiths over others, you are going to create problems.”

However, Cllr Kevin Sheahan did receive some support from some of his colleagues.

Cllr Emmet O’Brien told CatholicIreland.net that, “the cross is a masterpiece of local craftsmanship. It is very rarely that I would agree with Cllr Sheahan, but on this occasion, I commend him on having the foresight to erect this cross.”

He added, “There are numerous secular countries throughout Europe which still have crucifixes and crosses in public places. A cross is not an affront to any other religion. It is a sign of peace, tranquility and a sign of harmony between religions.”

While Councillor Sheahan has made no comment publicly on the issue, he did announce his intention at the start of his mayoral term to erect a cross in the council chamber.

“I am a baptised Catholic. I wouldn’t be the strongest Catholic in my community — the very opposite, actually. I am a sinner and I am not a regular churchgoer. I have my beliefs and I have visited Jerusalem twice and that, more than anything in my life, made a huge impression on me,” he said when elected Mayor.

“It is my own private religion if you like. I have great devotion to the Cross. It is my intention to present the cross to the new 40-member council to be placed in county hall where our full meetings will be held, as soon as the chamber has been refurbished.”

“This Christian symbol in a Christian country will be erected there, that’s my intention. But if the councillors vote not to have it put up, then I won’t do it.”

He added, “But I would hope to have the support of the majority of the councillors.”

It is also believed that the cross was paid for personally by Cllr Sheahan.

The controversy over a crucifix being erected in council chambers is not new.

Last Year, Kerry County Council voted to erect a crucifix at its meeting chambers in Tralee.