Home > Featured > Rosary priest film to be released in October

Rosary priest film to be released in October 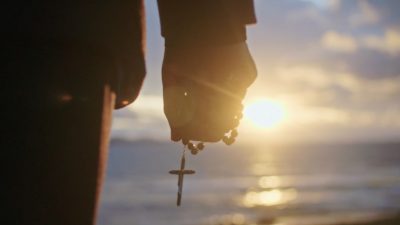 A shot from the film, with the nephew of Fr Peyton, Pat Peyton, holding Rosary beads.

A new film about one of Ireland’s most famous priests, Fr Patrick Peyton, is due to be released in October this year.

The film documentary Pray tells the story of the man who became known as “The Rosary Priest” and who coined the phrase “the family that prays together stays together.”

The national director of Family Theatre Productions, Fr David Guffey, says: “We have created a moving film that depicts the power of prayer, but Pray is more than a movie — it’s a prayer movement.”

Indeed, in this time of pandemic and social distancing, Fr Guffey says the message of Fr Peyton is more important than ever. “At a time when families have been huddled together and are rediscovering the beauty and closeness of family life, Pray is a beacon of light to remind families that there is authentic power in family prayer.”

Born in Attymass, near Ballina, Co. Mayo in 1909, Patrick Peyton’s dream from his earliest days was to become a priest, but the cost of a seminary education was beyond his family’s means, and it only became possible for him to pursue his vocation after he emigrated as a steerage passenger to the United States in 1928.

After finding work as a sexton in St Peter’s Cathedral in Scranton, Pennsylvania, where he and his brothers and sisters settled, the teenager was able to start his secondary studies in an American high school. After graduating, he joined the Moreau Seminary at the University of Notre Dame.

In his final year of studies, he was struck by tuberculosis, a disease that was incurable at that time, but after praying earnestly to Our Lady, the young seminarian recovered from the disease. After his ordination as a member of the Congregation of the Holy Cross (Congregatio a Sancta Cruce (C.S.C.)), he vowed to devote himself to the Blessed Virgin for the rest of his life.

The result was a series of Rosary Crusades that were held across the world, bringing tens of thousands of people together to pray for peace and conversion.

The Fr Peyton Memorial Centre in Attymass reckons that during his lifetime, Fr Peyton addressed some 26.45 million people. His biggest rally was in Manila, where more than two million people gathered to hear him speak. Millions more heard his message through what was then the new media of radio and television.

In 2001, Cardinal Sean P. O’Malley, Archbishop of Boston, opened the cause for the sainthood of Fr Peyton, and Pope Francis declared the Irishman to be a “venerable” in December 2017.

The Fr Peyton Memorial Centre was opened in 1998, and last year it had some 15,000 visitors, says centre manager Padraic Walsh. “We’ve seen the movie and we think it is very good,” he said. “Our hope is that it will increase interest in Fr Peyton and in his message. It would be good if it also increased our visitor numbers – we offer a guided tour, we have a museum with Fr Peyton memorabilia and a café that has scones and apple tarts that are legendary!”