Home > Featured > Capacity to listen is root of peace: Pope

Capacity to listen is root of peace: Pope 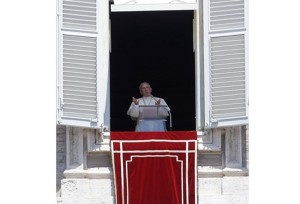 Before praying the Angelus yesterday Pope Francis spoke of the importance of hospitality calling it a real Christian virtue, but one which at times the world neglects.

Drawing his inspiration from yesterday’s Gospel in which St Luke recounts the story of Jesus who is welcomed into the home of two sisters Martha and Mary, the Pope recalled that they  both offered hospitality in different ways. Martha was busy preparing things while Mary stayed to listen to Jesus’ words. When Martha protested that she had to do everything, Jesus reminded her that in order to welcome him many things are not necessary; indeed, only one thing is necessary, said Pope Francis, to listen to Jesus, “show him a fraternal attitude, so he feels what it is like to be part of the family, and not in a temporary shelter”.

The Holy Father said that a guest — any guest, not just Jesus — doesn’t need only to be served and fed. “Above all it is necessary that he is listened to,” he said.

Putting the Gospel reading in the context of life today, Pope Francis gave an example. He said that there are many people in nursing homes and hospices, but it is not always the place where real hospitality is practiced. “Several institutions that cater to many forms of illness, loneliness, and marginalisation are created, but the chance for those who are foreigners, marginalised, or excluded to find someone willing to listen decreases.” 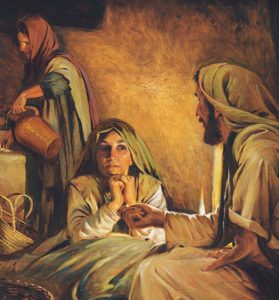 He also noted that people are so taken up with the pace of life, with big and small problems that we do not take the time to listen to one another. “Even in one’s own house, among one’s own family, it’s easier to find service and care of various types than listening and welcome,” said Pope Francis.

“Today we are so busy and in such a hurry, with so many problems, some of which are unimportant, that we lack the capacity to listen. We are constantly busy and thus we don’t have time to listen,” he said.

Grandparents, especially, he said, need to be heard.  “I ask you to learn to listen and dedicate more time to this,” the Pope concluded. “In the capacity to listen is the root of peace.”

During the Angelus, Pope Francis also recalled the terrible events of last Thursday when a man ploughed a lorry into crowds of people celebrating Bastille Day in Nice, France, killing over 80 and injuring many others.

Thinking of the loss of innocent lives, many of whom were children, the Pope said, “the pain of the massacre is alive in our hearts”. “I am close to each family and the entire French nation which is in mourning.” He added, “may God, the good Father, welcome all the victims into his peace, support the injured and comfort their families. May he dissolve every project of terror and death, so that man no longer attempts to spill his brother’s blood.”