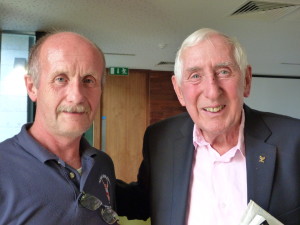 Olympic gold medalist, Ronnie Delany, has said he has a deep sense of faith and it provided a support mechanism for him during his sporting career.

Speaking to CatholicIreland.net at a conference on Ethics and Sport organised by the Department of Religions and Theology in Trinity College Dublin at the weekend, the 78-year-old said, “I believe. I have a deep sense of faith – I used my faith as my support mechanism.”

He explained that with the intensity of what he was doing at that high level of competition, he needed his faith.  “To take on the world at 19 years of age and to win the world title at 21 – that takes absolute concentration. So I was very deeply religious in the sense that I credited that gift with destiny.”

Explaining further, he said he believed destiny played a role in life. “I often look back at other great athletes who trained equally hard as I did and who won equally well as I did. They came to the Olympics and they didn’t perform in this one race. It is one day which takes place every four years for which you get this one chance and it wasn’t within their destiny – it was within my destiny.”

“My sense of faith, my sense that I had a great gift and my sense of responsibility to explore that talent, all played a role,” he said.

Ronnie Delany famously fell to his knees and blessed himself after winning the gold medal for the 1,500m race in the Melbourne Olympics of 1956.

Speaking at the same conference, Jason Sherlock warned that racism is likely to become a bigger issue in Irish sport in the years ahead as young players from different ethnic backgrounds come up through the ranks.

The GAA has “a great opportunity to make a strong statement saying racism isn’t part of this sport,” he said.

“It is one thing to be reactive when an incident happens but I would like to see the GAA being a whole lot more proactive and put in place procedures to educate players,” he urged.

Ronnie Delany told CatholicIreland.net that racism had been evident in the USA when he was training there in the 1950s.

“Charles Jenkins, an African American athlete on my team, couldn’t stay in the same hotel or eat in the same restaurant as the rest of the team when we travelled south of a certain line in America,” he recalled.

“Today I see my grandchildren taking part in Gaelic, soccer and hockey, and with the changing Ireland, many of the children they are playing with are from different ethnic backgrounds.”

Separately, the late Ulster and Ireland rugby player, Nevin Spence, was the first inductee in the ‘Fair Play Hall of Fame’, which was launched at the conference in TCD.

His sister Emma Spence received the award, which honours those who represent what is best in sport, from rugby legend Ollie Campbell.

Journalist and writer, PJ Cunningham joined TD John O’Mahony, who was twice All-Ireland winning manager, and Irish rugby legend, Hugo MacNeill in a discussion of the issues raised during the conference including banning alcohol sponsorship of sport, the issue of drugs in sports, racism and women in sport.