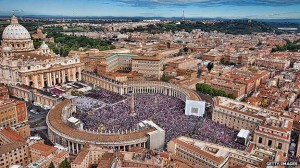 The Papal Basilicas are coming to a cinema near you.

For three days next week they will be the protagonists in a 3D film boasting previously unpublished images and hidden details in their art treasures.

For three days only from 11 to 13 April cinema audiences will be guided on a 3D tour of Rome’s four Papal Basilicas – St Peter’s, St John Lateran, St Mary Major and St Paul’s Outside the Walls.

During the 90 minute film entitled ‘St Peter’s and the Papal Basilicas of Rome’ experts will explain how these famous places of prayer have evolved over the centuries, illustrating the works of art they contain and the celebrated artists associated with them including, Giotto, Michelangelo and Bernini.

Thanks to the vast arsenal of technology employed, audiences will be able to see and appreciate the hidden details of the art treasures, such as Michelangelo’s signature on the Pietà.

In addition, cinema goers will be able to view unpublished images, thanks to the use of helicopters.

And to complete this visual feast for the eye the power of 3D will put the viewer in the middle of the scene and in direct contact with the works of art.

One those featured in the film is the Director of the Vatican Museums, Antonio Paolucci.

“The production that SKY is doing is precious for people who think they know these monuments but in reality they don’t know them and they don’t see them, so it’s a kind of visual help,” he comments.

The film which will be distributed in over fifty countries including Italy, Mexico, Chile, Peru, Colombia, Canada, UK, Ireland, and Spain, is produced by the Vatican Television Center, and SKY 3D  in collaboration with the Italian Ministry of heritage and culture.