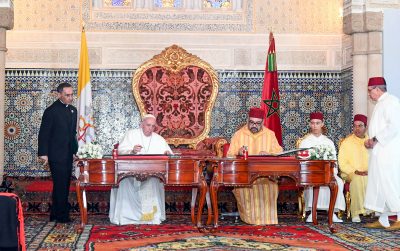 When Pope Francis travelled from Rome to Rabat to meet King Mohammed VI of Morocco yesterday, the thoughts of both men were on another Mediterranean city in another country: the divided city of Jerusalem.

A joint declaration was made by the two religious leaders that they “believe it is important to preserve the Holy City of Jerusalem / Al Qods Acharif [as it is known in Arabic] as common patrimony of humanity and especially the followers of the three monotheistic religions”.

While Pope Francis is Bishop of Rome and Supreme Pontiff of the Catholic Church, King Mohammed is a member of the Alaouite dynasty, a descendent of the founder of Islam, known in Morocco as Amir al-Muminin, the Commander of the Faithful.

The two men called on the specific, multi-religious character, spiritual dimension and cultural identity of Jerusalem to be preserved and promoted, with “full freedom of access to the faithful and the right of each to exercise their own worship”.

In recent years, the state of Israel has tightened its grip on Jerusalem and reinforced its claims that it is the nation’s capital. East Jerusalem was part of the Kingdom of Jordan between 1948 and 1967, but since the Six-Day War, the city has been occupied by Israel contrary to UN resolutions. As a result, most countries, including Ireland, recognise Tel Aviv as the capital of Israel and maintain the embassies there.

However, the United States of America broke with the international consensus in December 2017 when President Donald Trump officially recognised Jerusalem as Israel’s capital and organised for the US embassy to be moved there in May last year.

In the meanwhile, Israel has actively altered the demographics of East Jerusalem so that since 1993 the majority of the population there is now Jewish, not Muslim. Additionally, the Israeli Defence Forces regularly curtail access to the Al-Aqsa Mosque which is located on top of the Temple Mount. This is much to the distress of the world’s Muslim population, as this Al-Aqsa Mosque is Islam’s third most holy site, the location of Mohammed’s ascent into heaven.

The trip by Pope Francis to Morocco follows his visit to the United Arab Emirates in February this year. It is seen as a concerted effort by His Holiness to promote inter-religious dialogue, cooperation and peace. He is not the first Pontiff to visit the Kingdom – Saint Pope John Paul II visited Morocco in 1995.

The Vatican has claimed that the two-day visit, which continues today, has been well received in local media, but it is notable that the visit is not mentioned on the Moroccan Government information website, which does feature a story about a forthcoming visit to Morocco, next week, of King Abdullah II of Jordan. This may indicate that for King Mohammed the optics of the visit are more important to foreign audiences rather than his own population, which is 99 per cent Muslim.

Nevertheless, the Pope’s comments on Jerusalem, and on the plight of migrants travelling through Morocco from Sub-Saharan Africa to Europe, have been widely reported in the world’s media. It is notable that the visit is featured prominently in the French press and on the website of the Bishops’ Conference of France. Morocco was once a colony of France and, while Arabic and Berber are the state’s two official languages, many of Morocco’s citizens are Francophones. The Catholic population there today is tiny, numbering between 2,000 and 5,000 people.