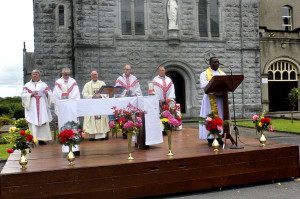 The Archbishop of Cashel and Emly has paid tribute to the long and distinguished contribution to Irish education made by Rockwell College in Co Tipperary.

In his homily at a Mass to mark 150 years of Spiritan presence in the College, Archbishop Dermot Clifford praised Rockwell’s educational ethos.

He noted that “when Rockwell opened as an educational institution in 1864 it was less than a generation after the greatest crash in Irish economic and social history, namely the Great Famine.”

It also opened against a background of the rising of the Fenian movement as well as the American Civil War and an Ireland without the GAA, he said.

The Mass last Sunday was concelebrated by Archbishop Clifford who was joined by the Spiritan Provincial, Marc Whelan CSSp, the Spiritan community leader in Rockwell, Matthew Knight CSSp, and school chaplain, Samuel Udogbo CSSp with a large number of other Spiritans and diocesan clergy.

The music was led by the Tipperary Gospel Choir.

The large attendance at the Mass included current and former students of the school and their parents, Spiritans attached to the Congregation’s communities in Rockwell and elsewhere, as well as staff and members of the public.

The story of Rockwell goes back to 20 July 1864 when the Spiritans were given the former estate house and lands.

In the early years, the College served as an Irish seminary of the Spiritans and this coincided with the beginning of the great missionary movement from Ireland.

Fr Peter Conaty CSSp recalled that “as many as 1,000 labourers went into the vineyard of home and overseas mission from Rockwell, the most celebrated being Joseph Shanahan CSSp, a founder of new missionary societies and congregations, male and female, in Ireland and Nigeria.”

Fr Conaty, who is the chairperson of the trust body for Spiritan schools in Ireland, added that the youthful vigour of what had been a large Spiritan community attached to the school in the past has now ‘matured to grey-haired wisdom and contemplative presence’ as direct involvement in the school by the smaller community of Spiritans is now principally in the area of pastoral care.

He concluded by acknowledging the very valuable contribution that the Rockwell Past Students Union has made to the school throughout its history.

He also praised the excellent work done by the current and previous boards of management of the co-educational school, as well as by the principal Ms Audrey O’Byrne and her team of dedicated professionals.

Fr Brendan Carr CSSp, a member of the current leadership team of the Spiritans and, like Fr Conaty, a past pupil of Rockwell, quoted from the book “Rockwell College 1864-2014” by Dr Seán O’Donnell.

It states: “Few Irish schools can claim to have so many persons of distinction within their walls as Rockwell College had in the years between 1890 and 1905” when its then students included future President Éamon de Valera, the patriot Thomas McDonagh and poets Mgr Pádraig de Brún and Pádraic Ó Conaire.

Fr Carr went on to recall his own teachers from Rockwell mentioning that “Often in adult life I thought of their words of wisdom; remembering their preferred poetry or literature, favourite composers in music, [as well as their] skills in accounting and management that became invaluable tools in ministry and good stewardship.”

In her address, Ms O’Byrne said that “Rockwell College is its people. Our role for 150 years has been to provide education and care to the young people entrusted to us…”

“My prayer is that our pupils will go out into the world, as they have done for 150 years, and continue to make their contribution in a way that is befitting the Spiritan education they have received. We celebrate our past today, and we look forward with hope to the future.”